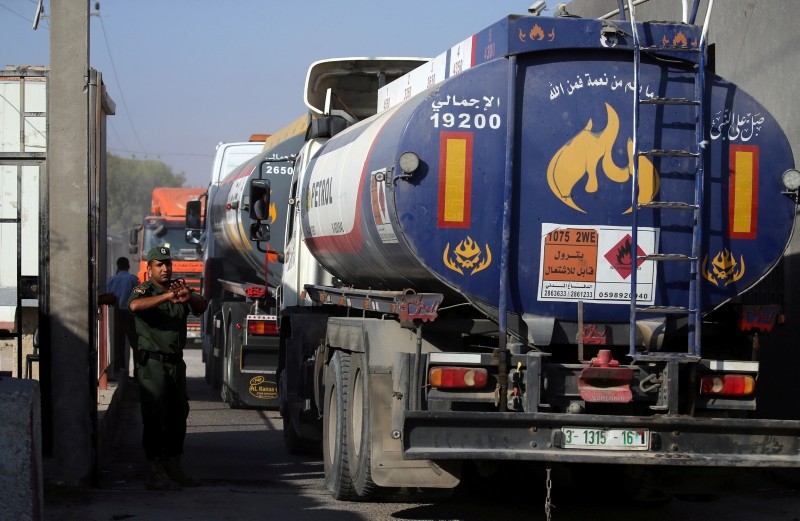 A member of Palestinian security forces gestures as a fuel tanker arrives at Kerem Shalom crossing in Rafah in the southern Gaza Strip August 15, 2018. (Reuters Photo)
by Compiled from Wire Services Aug 15, 2018 12:00 am

After a long delay in supplying goods to the besieged enclave, Israel allowed commercial goods back into the Gaza Strip Wednesday.

An AFP journalist at the Kerem Shalom crossing said dozens of trucks carrying various types of goods, including fuel, began passing into the blockaded Gaza Strip. The Israeli army said the crossing is opened for "full activity."

Kerem Shalom is the main commercial crossing between Israel and the Gaza Strip, and serves as the primary avenue for food, fuel, construction materials and aid to enter the beleaguered Palestinian territory.

Israel announced on Tuesday it would lift the commercial goods ban it imposed on July 9 in response to the launching by Palestinians of incendiary balloons across the frontier. There have been fewer reports in recent days of such incidents, which have burned large tracts of agricultural land and forests in southern Israel.

Fuel shipments to Gaza were temporarily suspended in July for similar reasons. Food and medicines have been allowed through, but fuel and cooking gas had been intermittently blocked, including since August 2. All other goods were turned away.

Fuel shortages in Gaza have contributed to chronic power outages that have left its 2 million residents with just a few hours of electricity per day. The United Nations warned that the closure of the crossing would make the situation even worse.

Israel also expanded Gaza's fishing zone, in waters under Israeli naval blockade, from three to nine nautical miles off the southern coast and to six nautical miles in the north, the head of Gaza's fishermen's union said. The Oslo interim peace accords in the early 1990s set a 20 nautical mile limit, which was never implemented. Since then the zone has ranged in size between three and six nautical miles.

Defense Minister Avigdor Lieberman said Wednesday that he decided to ease the restrictions "as a clear message to residents of the Gaza Strip: Quiet pays and violence does not pay."

Gaza has been on the brink of collapse after weeks of violence left more than 13,000 Palestinians wounded, overwhelming an already disastrously weak health system, the International Committee of the Red Cross (ICRC) warned in late May.

Since 2007, the Gaza Strip has suffered under a crippling Israeli and Egyptian blockade that has gutted its economy and deprived its roughly two million inhabitants of many vital commodities, including food, fuel and medicine. In the long-embargoed enclave, the humanitarian situation has grown worse each day.

Gaza border protests broke out on March 30 and have led to months of tension that have also seen several military flare-ups. At least 169 Palestinians have been killed in Gaza by Israeli fire since March 30, mostly during clashes and protests. One Israeli soldier was shot dead by a Palestinian sniper in July.

Hamas militants in Gaza and Israel have fought three wars since 2008.