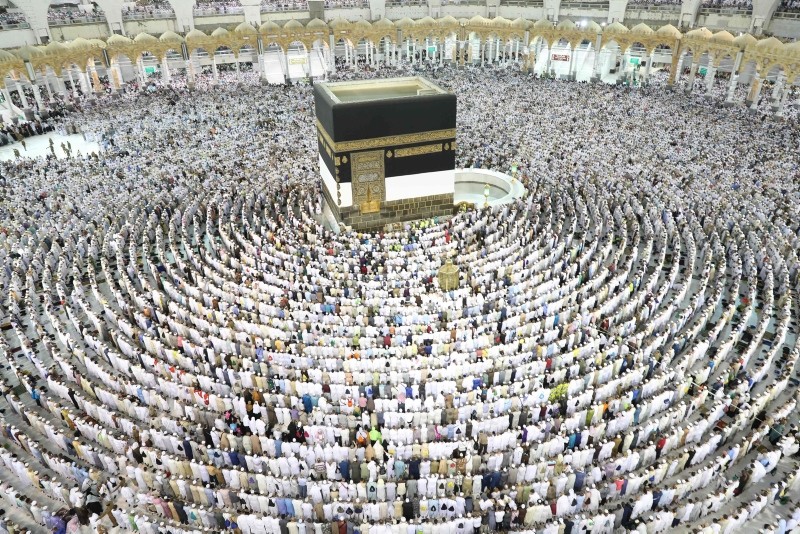 Muslim worshippers perform prayers around the Kaaba, Islam's holiest shrine, at the Grand Mosque in Saudi Arabia's holy city of Mecca on August 15, 2018. (AFP Photo)
by Daily Sabah Aug 16, 2018 12:00 am

Saudi Minister of Information Awad bin Sales al-Awad confirmed that the government is fully ready to serve around 2 million Muslim pilgrims visiting the holy city of Mecca during the hajj.

Al-Awad conducted inspections on Thursday at the Ministry of Radio and Television, the Saudi Press Agency and information centers in Arafat, Muzdalifah, and Mina and said Saudi Arabia will provide services, security and safety to all Muslims for the performance of pilgrimage and their access to the holy places without discrimination.

The hajj is one of the five pillars of Islam, which capable Muslims must perform at least once, marking the spiritual peak of their lives.

Al-Awad pointed out that Saudi Arabia welcomes all Muslims in the world to perform this religious ritual, stressing its categorical rejection of attempts to politicize the hajj or use it for purposes of disturbing this worship.

Al-Awad explained that the ministry has equipped several media centers in Makkah and holy places this year to serve guest journalists and media professionals both from Saudi Arabia and other countries, providing them with all the services needed by the press, technology, communication networks, computers and studios.

He pointed out that Saudi Arabia is hosting more than 800 media professionals from outside the country to cover the pilgrimage rituals and highlight them in a professional manner commensurate with the status of this great rite and the efforts of the kingdom.

Al-Awad added it is a huge effort to host the great number of pilgrims and facilitate their obligatory performance, with six official radio stations and 10 international broadcasters in 10 languages, providing news bulletins and daily programs on the pilgrimage. There are also 16 direct digital publishing channels in six languages, working around the clock covering the pilgrimage season in a creative, fast and innovative way.

Al-Awad said that in recognition of the Ministry of Information's effort of the importance of digital media, and its influential role in the world of modern technology and the speed of its information delivery, it last year launched the International CIC and its account on Twitter.

To strengthen relations with the international media and pursue more open policy with the world's public, it has begun broadcasting information and documented data on the events and facts, humanitarian work and services performed by Saudi Arabia in several languages, primarily English, French and German.

Al-Awad reviewed the efforts exerted by the ministry's departments and sectors to cover the pilgrimage with more than 1,000 administrative, media, technical staff, a number of media centers and studios in Makkah Al-Mukarramah, Madinah and other places.

The media centers have been equipped with a number of Saudi technicians, media professionals, editors, photographers and designers to provide support to journalists involved in the pilgrimage coverage.

The Minister of Information pointed out that the ministry chose its slogan for this year: "The world in the heart of the Kingdom."

The Minister of Information affirmed that the message of the high pilgrimage is to affirm "moderation, renounce extremism and terrorism, and promote the idea of the humanity of Islam, and that of hajj is a platform for transmitting a message of peace, security."