US supplied bomb that killed 40 children in Yemen, CNN reports 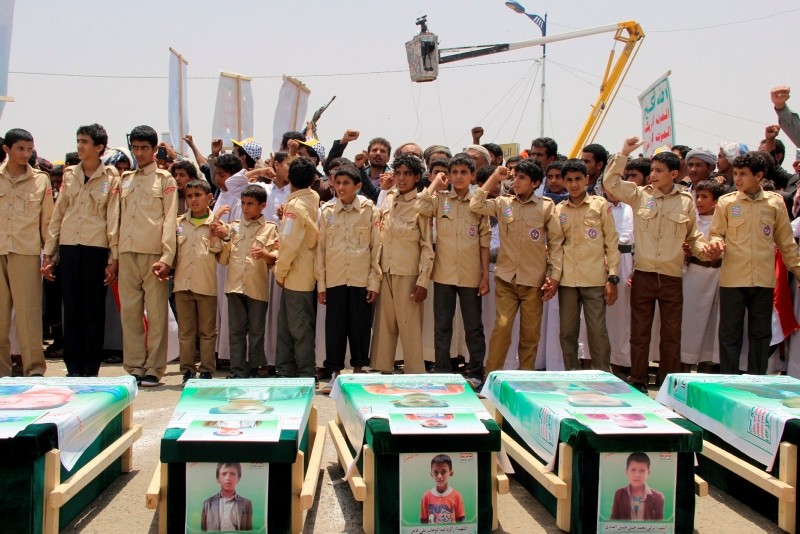 In this file photo taken on August 13, 2018 Yemeni children vent anger against Riyadh and Washington as they take part in a mass funeral in the northern Yemeni city of Saada. (AFP Photo)
by Aug 18, 2018 12:00 am

The bomb that killed 40 children and 11 others in a Saudi-led coalition airstrike on a bus in rebel-held northern Yemen was sold by the United States under a State Department deal with Riyadh, CNN has reported.

The numbers on shrapnel, of which images were taken shortly after the attack this month, indicate that it was a laser-guided Mk 82 bomb manufactured by defense contractor Lockheed Martin, CNN said Friday, citing munitions experts.

Former president Barack Obama banned the sale of precision-guided weaponry to Saudi Arabia after it used a similar bomb in an October 2016 attack that killed 140 people at a funeral in the rebel-held capital Sanaa.

But President Donald Trump overturned that ban after taking office in 2017.

Fifty-six children were also among the 79 people wounded in the August 9 strike on Saada province, a rebel stronghold that borders Saudi Arabia, according to the International Committee of the Red Cross.

The coalition has promised an internal inquiry but analysts and aid groups have voiced doubt that it is ready to provide the transparency and accountability demanded by the wider international community.

It is part of the world's worst humanitarian crisis, a conflict that has killed nearly 10,000 people since the Saudi-led coalition intervened in Yemen in March 2015 as Huthi rebel fighters closed in on the last bastion of President Abedrabbo Mansour Hadi's government.

Coalition commanders have admitted a small number of mistakes, but there has been no public disciplinary action or changes to the rules of engagement.

The commanders have accused rebels of using civilians as human shields.