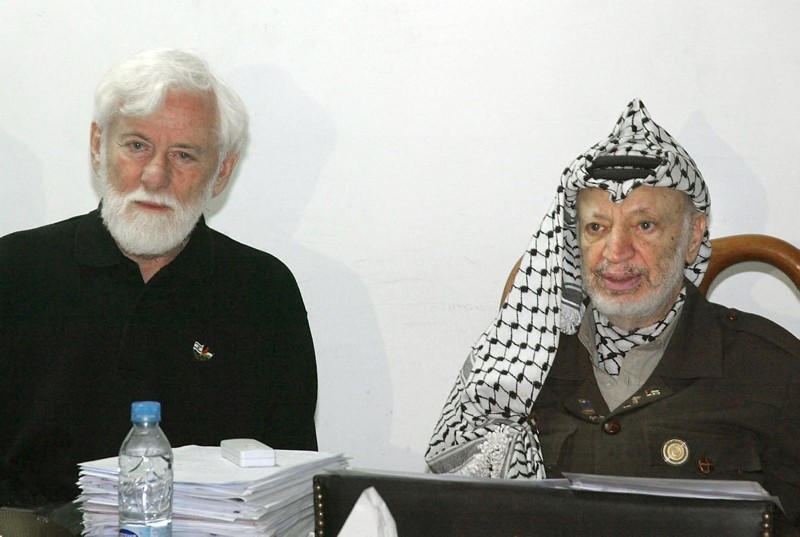 This May 9, 2002 file photo shows Israeli journalist and peace activist Uri Avnery, left, sitting next to Palestinian leader Yasser Arafat, during a meeting at the latter's office in the West Bank city of Ramallah. (AFP Photo)
by Compiled from Wire Services Aug 20, 2018 12:00 am

Uri Avnery, a trailblazing Israeli journalist and peace activist and one of the first to openly advocate for a Palestinian state and stoked controversy by meeting Yasser Arafat, has died. He was 94.

Avnery passed away on Monday at a Tel Aviv hospital after suffering a stroke.

For decades, he was a symbol of the Israeli peace camp, easily recognized by his thick white beard and white hair. A member of Israel's founding generation, he fought in its war of independence before becoming a publisher, member of parliament, author and activist.

Seen by many as the backbone of Israel's peace movement, Avnery never lost hope an agreement could be reached with the Palestinians.

But before becoming a prominent peace activist, he was a soldier and even part of a right-wing militia.

Born in September 1923 in Beckum, Germany as Helmut Ostermann, Avnery emigrated to British-mandate Palestine with his family at the age of 10, fleeing Nazism.

In 1950, he founded an independent weekly magazine, Haolam Hazeh, which he edited for 40 years.

The anti-establishment journal, the only one at that time not run by a political party, had a considerable influence on the Israeli press.

He founded a political movement in 1965 and was elected to Israel's parliament where he served eight years.

In 1979 he was voted in as part of a different movement and spent two more years as a lawmaker before resigning.

Avnery had pushed since the end of the first Arab-Israeli war which began in 1948 for the creation of a Palestinian state alongside Israel as a means to bring peace.

In the 1982 Lebanon War, he famously sneaked into besieged Beirut to talk to Israel's then-nemesis, PLO chairman Yasser Arafat, causing a firestorm in Israel.

Avnery challenged successive Israeli governments in arguing that a Palestinian state was the only way to secure peace for a democratic Israel with a Jewish majority.

As a teen Avnery was a member of the Irgun, the right-wing Zionist militia that fought both local Arabs and Palestine's British rulers prior to Israel's 1948 declaration of statehood.

He had no regrets about belonging to the group.

"I fought for the freedom of my people against the British occupiers," he said. "For the same reasons, I always thought that the Palestinians were entitled to their independence and freedom."

A prolific writer, he published over 10 books including his 2014 autobiography titled "Optimistic".

While prospects for peace seemed to be dwindle in recent years under rightwing Israeli governments, Avnery remained firm in his belief the public could be swayed to support a Palestinian state.

His views earned him praise internationally while being slammed by many on the Israeli right as a traitor to the Zionist movement. Arab Israeli politician Ayman Odeh and former Israeli foreign minister Tzipi Livni were among the first to pay tribute to Averny. Odeh, head of the Joint List, a mainly Arab alliance in Israel's parliament, called him "a dear man who dedicated his life to peace."

"His voice, ideas and worldview will continue to resonate after his departure," he said in a statement.

Opposition head Livni, from the center-left Zionist Union, called Avnery "a courageous journalist and rare, trailblazing man." She said he maintained "his principles despite attacks and planted in the heart of Israelis ideas of peace and moderation, even when they weren't in the lexicon."

President Reuven Rivlin said that his fundamental disagreements with Avnery "were diminished in light of the ambition to build a free and strong society here."

He remained a strong supporter of Arafat long after most of Israel gave up on him as a peace partner following the eruption of Palestinian violence in the early 2000s. Israel's peace camp has increasingly fractured and become politically sidelined since the 1990s when the Labor Party under then-Prime Minister Yitzhak Rabin led talks with the Palestinians on interim peace deals. Peace efforts were slowed by Rabin's 1995 assassination and Benjamin Netanyahu's first term as prime minister.