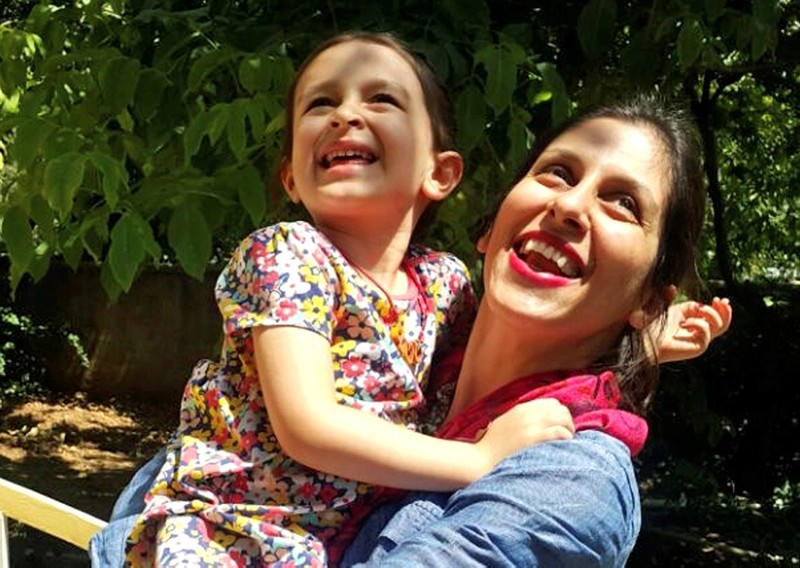 In this undated photo provided by the Free Nazanin Campaign, Nazanin Zaghari-Ratcliffe hugs her daughter Gabriella, in Iran.
by Aug 23, 2018 12:00 am

A British-Iranian charity worker detained in an Iranian prison on espionage charges since 2016 has been temporarily released, Iran's ambassador in London said.

"Nazanin Zaghari-Ratcliffe has been granted a three-day release from prison in Iran to reunite with her family," Hamid Baeidinejad said on Twitter. "She immediately joined her 4-year-old daughter, Gabriella, who welcomed her mom with flowers."

The temporary release was intended to allow her to see her family, particularly her daughter, the ambassador said.

Zaghari-Ratcliffe, a project manager for the Thomson Reuters Foundation, was sentenced to jail for five years in 2016.

Her husband told Britain's Press Association (PA) news agency that her lawyer was hopeful for an extension to the three-day release.

"This was a very happy surprise after a number of false dawns recently, which had been increasingly unsettling," PA quoted her husband as saying.

British Foreign Secretary Jeremy Hunt also confirmed her release in a tweet, praising the "tireless campaigning" of her husband and friends.

"But being in prison AT ALL is gross injustice and she must be PERMANENTLY released for which every effort will continue," he said.

The British arm of Amnesty International also celebrated her temporary release as an "amazing news."

"We must keep up the pressure on Iran by demanding her freedom," a tweet by the rights watchdog read.

Zaghari-Ratcliffe, along with her 22-month-old daughter, was arrested in April 2016 by the Iranian security forces in Tehran and charged with conspiring to overthrow the regime by running a programme to train journalists in Iran. Zaghari-Ratcliffe denies the charges.

A gaffe by Hunt's predecessor, Boris Johnson, in the British parliament in September led Iranian authorities to claim he had confirmed that Zaghari-Ratcliffe - who was on holiday in Iran to introduce her baby daughter to her parents - had trained journalists while in the country.

Johnson later travelled to Tehran to try and repair the damage, but was unsuccessful in securing her release.

Her now 4-year-old daughter lives with her grandparents in Iran, while her husband has been barred from entering the country.

Her jail term became a cause of diplomatic tensions between Britain and Iran.