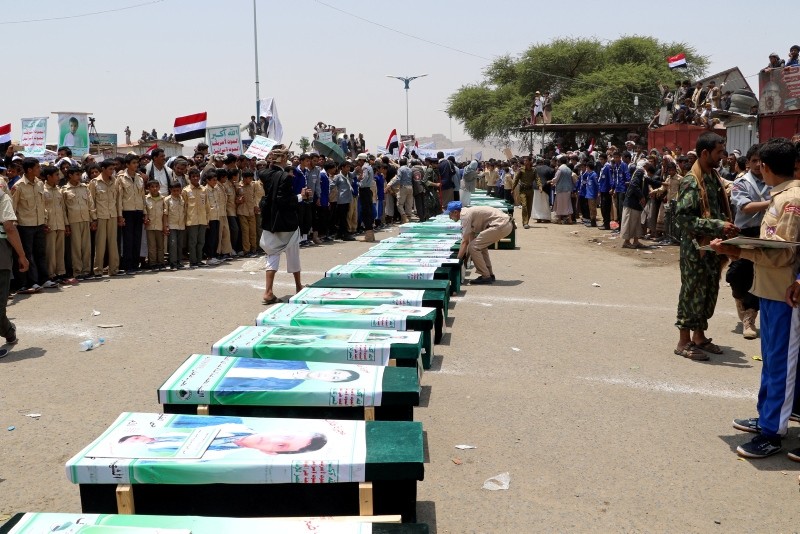 Mourners attend a funeral of people, mainly children, killed in a Saudi-led coalition air strike on a bus in northern Yemen, in Saada, Yemen August 13, 2018. (Reuters Photo)
by Compiled from Wire Services Sep 01, 2018 12:00 am

The Saudi-led coalition fighting in Yemen admitted Saturday that "mistakes" had been made in an August airstrike on Yemen that killed 51 people including 40 children.

An official said an investigation by the coalition had found "mistakes" were made in the strike on a crowded market in northern rebel-held Yemen, adding that those responsible must be "punished".

The rare concession by the Joint Incident Assessment Team, an investigative entity set up by the coalition, follows mounting international pressure, including from allies, to do more to limit civilian casualties in the 3-1/2 year civil war.

The Western-backed alliance fighting the Iranian-aligned Houthi group in Yemen said at the time that the airstrikes had targeted missile launchers used to attack the southern Saudi city of Jizan a day earlier and accused the Houthis of using children as human shields.

JIAT legal adviser Mansour Ahmed al-Mansour on Saturday said the strikes had been based on intelligence indicating that the bus was carrying Houthi leaders, a legitimate military target, but that delays in executing the strike and receiving a no-strike order should be investigated.

"There was a clear delay in preparing the fighter jet at the appropriate time and place, thus losing (the opportunity) to target this bus as a military target in an open area in order to avoid such collateral damage," Mansour told reporters in the Saudi capital.

"The team believes that the coalition forces should immediately review the application of their rules of engagement to ensure compliance..." he added.

Mansour also recommended that the coalition hold those responsible for the error accountable and compensate victims.

Last week, a U.N. panel of human rights experts said that some coalition airstrikes may constitute war crimes, while U.S. Secretary of Defense Jim Mattis said U.S. support for the Saudi-led coalition was not unconditional, but suggested the United States would continue to support the alliance as it works to reduce fallout on civilians.