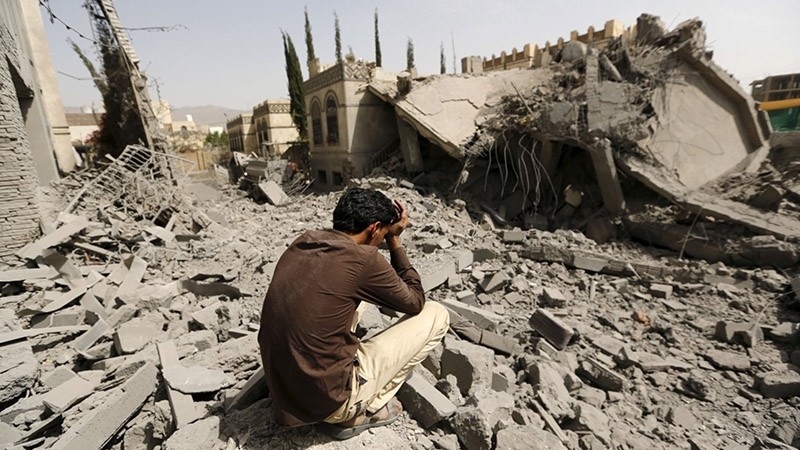 A guard sits on what is left of the house of Brigadier Fouad al-Emad, army commander loyal to the Houthis, after Saudi-led air strikes destroyed it in Sanaa. (Reuters Photo)
by Associated Press
Sep 04, 2018 12:00 am

Spain said Tuesday it has canceled the delivery of 400 laser-guided bombs purchased by Saudi Arabia, amid fears that the weapons could be used against Iran-aligned Houthi rebels in Yemen.

The arms deal was originally signed in 2015 under Spain's former conservative government, but the new center-left administration of Prime Minister Pedro Sanchez plans to return the 9.2 million euros ($10.6 million) already paid by the Saudis, Cadena SER radio reported on Tuesday.

A Defense Ministry spokeswoman confirmed the report, but declined to elaborate. She was not authorized to be identified in media reports.

International rights groups have blamed a Saudi-led coalition's airstrikes and other attacks in Yemen for the killing of civilians, including children. U.N. human rights experts say all sides, including militias backed by the United Arab Emirates, may have committed war crimes in the conflict raging since March 2015.

The Saudi embassy in Madrid did not immediately respond to emailed questions and follow-up calls.

Sanchez's Socialist party had promised to revise the country's arms deals before the new prime minister ousted his predecessor, Mariano Rajoy, in a parliamentary vote in June.

As a longtime commercial ally of Saudi Arabia, Spain is the fourth largest provider of military equipment and weapons to the Gulf state, according to Amnesty International. The Stockholm International Peace Research Institute, an independent global security database, says the United States, Britain and France are Riyadh's main suppliers.

The Saudi crown prince, Mohammed bin Salman, visited all four countries in April this year. Two months later, his government signed the purchase of five navy corvettes that a Spanish state-owned military shipbuilder has pledged to deliver for 2 billion euros ($2.31 billion). The contract had been in the works for years.

The sale was sharply criticized by Weapons Under Control, a campaign seeking to end arms sales to Saudi Arabia over its role in Yemen. The campaign, backed by Amnesty International, Greenpeace, Intermon Oxfam and Spain's FundiPau, also wants to end exports of weapons to Israel, a country they accuse of violating international laws in Palestine territories.

The group's representatives were meeting with Spanish trade officials on Tuesday to deliver thousands of signatures in support of their campaign, which also advocates for greater transparency in the sales of military and defense equipment that Spain shields under state secrecy laws.

A U.N. experts committee urged the international community last month to refrain from providing arms that could be used in the Yemen conflict, in reference to Western countries selling sophisticated weapons systems to the Gulf States.

The U.N. says the conflict in Yemen has become the world's worst humanitarian crisis, with more than 22 million people in desperate need in what was already the Arab world's poorest country.