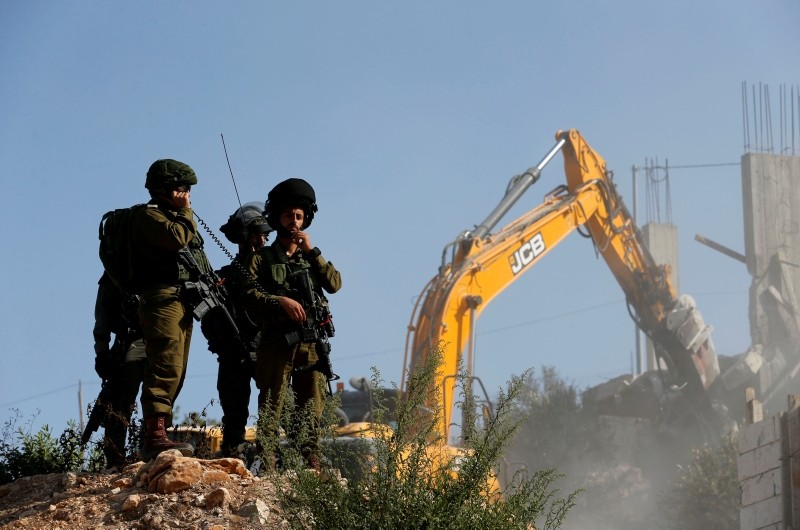 Israeli soldiers stand guard as machinery demolishes Palestinian houses in the village of Al-Walaja near Bethlehem, in the occupied West Bank, Sept. 3, 2018. (Reuters Photo)
by Compiled from Wire Services Sep 05, 2018 12:00 am

Defying international concerns, Israel's top court cleared the way yesterday for the demolition of a Bedouin village in the occupied West Bank. The Supreme Court, in a decision released by a court spokesman, rejected petitions against the demolition of Khan al-Ahmar and said a temporary injunction that had put a hold on the move would lapse in a week.

The residents of Khan al-Ahmar are the descendants of Bedouins who were expelled from the Negev by Israel after 1948, and who were relocated to the West Bank. Around 180 Bedouin, raising sheep and goats, live in tin and wood shacks in Khan al-Ahmar. It is outside Jerusalem between two Israeli settlements and was built without Israeli permits, which Palestinians say are impossible to obtain. Israel said it plans to relocate the residents to an area about 12 kilometers away, near the Palestinian village of Abu Dis. But the new site is next to a landfill, and rights advocates say that a forcible transfer of the residents would violate international law applying to occupied territory.

In May, the Supreme Court rejected a final appeal against its demolition after nine years of hearings before various tribunals. The international community called on Israel to reserve the illegal demolition order and forcible transfer of Palestinian Bedouin villages.

The European Union had publicly urged Israel to cancel the evacuation plan. Feisal Abu Dahouk, a resident of Khan al-Ahmar called the court's ruling "a racist decision," telling Reuters by telephone "there is no place we can go."

Defense Minister Avigdor Lieberman, who oversees the occupation of the West Bank, praised the judges for their decision in the face of "the coordinated hypocrisy attack by [Palestinian President Mahmoud Abbas] Abu Mazen, the left and European states." "Nobody is above the law; nobody will keep us from acting on our sovereignty and responsibility as a state," he said in a statement.

Ayman Odeh, head of the United Arab List in Israel's Parliament, said on Twitter the villagers had "fallen victim to the destructive policies of a rightist government that is broadening settlement blocs at the cost of Arab communities."

Settlements are one of the most heated issues in efforts to restart Israeli-Palestinian peace talks, frozen since 2014. The international community regards all Israeli settlements in occupied Palestinian territories to be illegal and a major obstacle for Middle East peace. The area, captured by Israel in 1967, is not sovereign Israeli territory, and Palestinians there are not Israeli citizens and do not have the right to vote. Some 500,000 Israelis live in the West Bank and east Jerusalem, areas that are also home to more than 2.6 million Palestinians. Palestinians have long argued that Israeli settlements could deny them a viable and contiguous state.