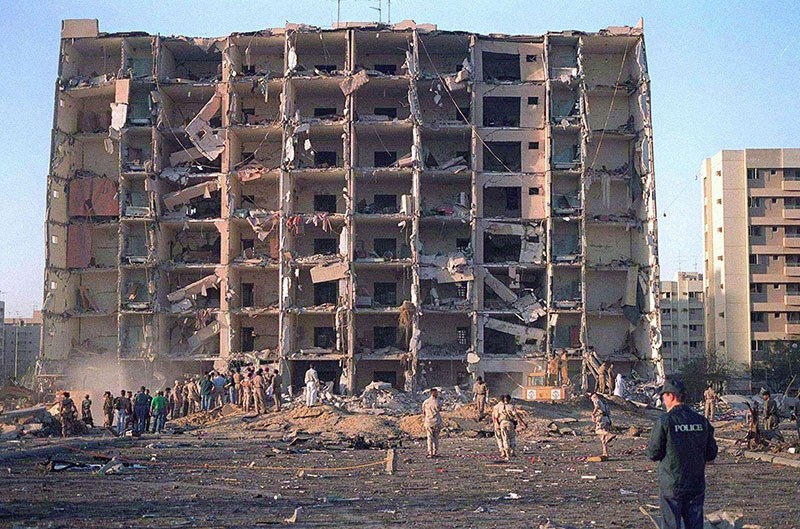 Investigators inspect the Khobar Towers military complex after an attack in Khobar, Saudi Arabia in June 1996. (Reuters Photo)
by Daily Sabah with Reuters Sep 11, 2018 12:00 am

A federal court in Washington D.C. has fined Iran $104.7 million in reparations for the victims and their families affected by the truck bombing in Dhahran, Saudi Arabia in 1996.

He said 15 other service members who were in the Khobar Towers complex and 24 of their relatives could receive some of the money from assault, battery and emotional distress.

Lawyer for the plaintiffs, Paul Gaston, said, "The plaintiffs are very pleased with the decision, and look forward to pursuing collections... Having the court ruling gives them some measure of justice."

However, Howell dismissed any claims for punitive damage as the U.S does not allow them to be claimed for attacks that occurred before 2008.

Thirteen members of Hezbollah were indicted in June 2001 in the federal court in Alexandria, Virginia over their alleged roles in the attack.

In December 2006, another federal judge in Washington ordered Iran to pay $254.4 million to family members and the estates of 17 Americans who died in the attack, also in a default judgment.

The U.S. government in 2015 established the U.S. Victims of State Sponsored Terrorism Fund to compensate victims.

Iran was designated by the U.S. Department of State as a state sponsor of terrorism in January 1984.