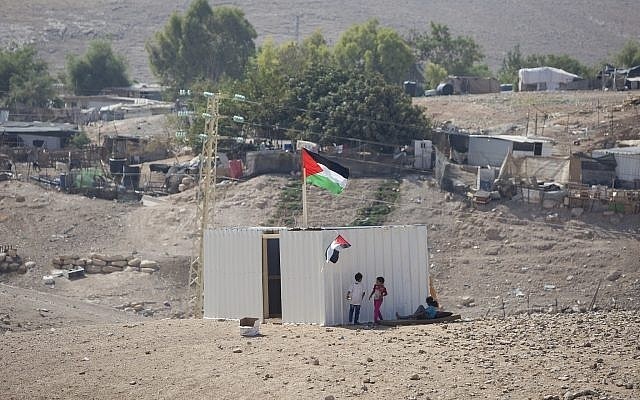 Palestinian girls stand by a newly made shed in the West Bank Bedouin community of Khan al-Ahmar, Sept. 11.
by Compiled from Wire Services Sep 12, 2018 12:00 am

Palestinians have filed a new complaint against Israel with the International Criminal court after the U.S said it would resort to any means to protect its allies against such actions at the war crimes body

The Palestinians announced a fresh push against Israel at the International Criminal Court (ICC) yesterday, a day after the United States said it was closing their Washington mission partly over the campaign.

Saeb Erekat, secretary general of the Palestine Liberation Organization (PLO), said it had submitted a new complaint over an Israeli "war crime" against forcible transfer of Palestinian Bedouin villages in the occupied West Bank, expected to be demolished by the Israeli army in the coming days.

The dossier "included a focus on the war crimes facing Khan al-Ahmar, specifically the crimes of forcible displacement, ethnic cleansing and the destruction of civilian property," Erekat said, as reported by Agence France-Presse (AFP). He added that the PLO had also asked the ICC's prosecutor to speed up a preliminary probe into other alleged Israeli war crimes. On Sept. 5, Israel's Supreme Court upheld an order to raze the village Khan al-Ahmar, where around 200 people live, on grounds that it was built without the proper permits.

International powers say the demolition the village could enable Israeli settlement expansion that would eventually cut the West Bank in two, further threatening the prospects of an independent Palestinian state. European countries urged Israel this week to refrain from demolition. Most countries consider settlements built by Israel on land it captured in the 1967 Middle East War as illegal and an obstacle to peace. They say they reduce and fragment the territory Palestinians seek for a viable state.

The ICC launched a preliminary probe in 2015 into allegations of war crimes and crimes against humanity in Israel and the Palestinian territories, in the wake of the Gaza war the previous year. It has yet to move to the next stage and open a full-blown investigation which could possibly lead to charges.

On Monday, John Bolton, national security adviser to U.S. President Donald Trump, attacked the ICC, threatening to sanction judges and other officials if they moved against U.S. soldiers or those of key allies.

The closure of the PLO office is one of many, although not the last, steps the U.S. has taken to impose a solution on the Palestinians rather than include them in the process.

In recent weeks, the United States cut more than $200 million in bilateral aid to the Palestinians and canceled its support for the U.N. agency for Palestinian refugees. The Palestinians accused the Trump administration of being one-sided. They cut off contact with the U.S. administration after Trump recognized the disputed city of Jerusalem as Israel's capital in December.

"This is yet another affirmation of the Trump administration's policy to collectively punish the Palestinian people, including by cutting financial support for humanitarian services including health and education," PLO Secretary-General Saeb Erekat said in a statement.

Husam Zomlot, head of the PLO mission in Washington, called the closure of the office "bullying and blackmailing" and said the U.S. government was "blindly executing Israel's 'wish list.'"

Both Erekat and Zomlot pledged to push forward with Palestinian efforts at the ICC, where the chief prosecutor has already opened a preliminary probe into the allegations of rights abuses by the Israelis.

Palestinian foreign minister Riyad al-Malki visited the ICC in May and called on it to open an immediate investigation. The Palestinians have asked the ICC to investigate Israel on issues ranging from settlement building in the occupied West Bank to civilian casualties in the 2014 Gaza war, among others.