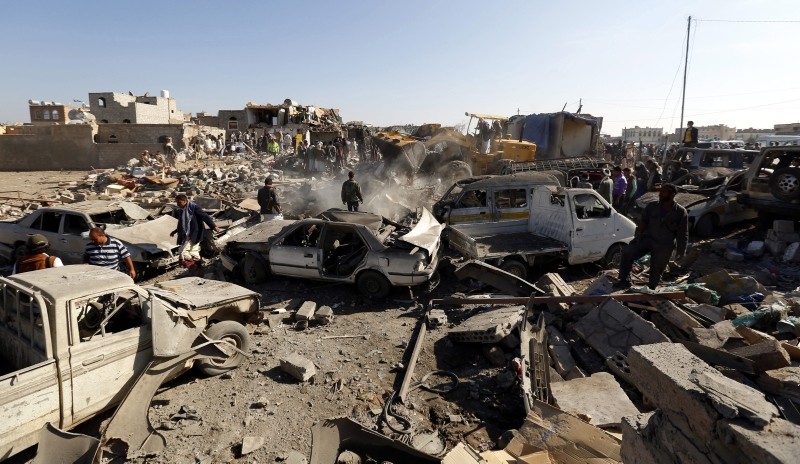 U.S. Secretary of State Mike Pompeo said on Wednesday he had certified to the U.S. Congress that Saudi Arabia and the United Arab Emirates were working to avoid harming civilians in Yemen, while dozens of Yemeni detainees have started a hunger strike in an Emirati-run prison.

Some of them tortured at the hands of Emirati forces, the prisoners decided to start a hunger strike after three inmates tried to commit suicide in the past weeks, including two by swallowing pills, according to a statement smuggled from the prison of Beir Ahmed in the southern city of Aden on Monday.

The statement also said that while prosecutors had ordered the release of some prisoners remaining in detention, others weren't referred to any judicial authorities at all after they were transferred from one prison to the other.

Pompeo's decision comes after the coalition in Yemen acknowledged that its airstrike last month killed 40 children and 11 others. The CNN shortly after reported that the bomb used during the airstrike was manufactured by Lockheed Martin and sold by the U.S.

Pompeo said he delivered the certification on Tuesday to Congress, as required by U.S. law to continue American refueling of Saudi and UAE warplanes in the conflict, which has led to the world's worst humanitarian crisis.

In July, Amnesty International said the UAE committed a string of human rights violations in its Yemeni prisons and that they could amount to war crimes after investigating 51 cases of enforced disappearances at the hands of UAE-backed forces between March 2016 and May 2018.

Amnesty called for investigations into a network of unofficial prisons across southern Yemen where it said "egregious violations" have been committed, including enforced disappearances and torture.

In June, the Associated Press revealed that hundreds of detainees had been subjected to sexual abuse and torture.

The AP has since identified at least five prisons where security forces use sexual torture to brutalize and break inmates.