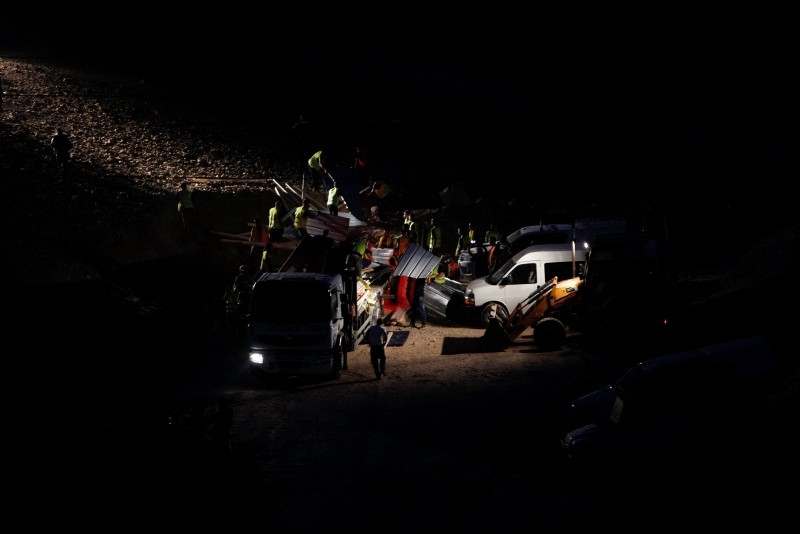 Israel security forces on Thursday dismantled several shacks built by Palestinian protesters near Khan al-Ahmar, a Bedouin village in the occupied West Bank that Israel has slated for demolition.

Protest leader Abdullah Abu Rahmeh said about 200 soldiers converged on the area of the Khan al-Ahmar encampment before dawn, dismantled the shacks and loaded the parts onto trucks. Protesters chanted "Out, out, terrorist army," as the trucks and soldiers left after daybreak.

Israel's Supreme Court rejected an appeal last week, paving the way for Khan al-Ahmar's potential demolition. Israel says Khan al-Ahmar was illegally built and in an unsafe location near a major highway and has offered to resettle the residents 12 kilometers (7 miles) away under improved conditions. But critics say it's impossible for Palestinians to get building permits and the demolition is meant to make room for the expansion of an Israeli settlement.

Israel's military liaison agency with the Palestinians, COGAT, said on Twitter that five "movable structures that were illegally transported & installed" in the area had been taken down.

The five new huts had been assembled this week by activists from several rights groups and the Western-backed Palestinian Authority in support of the Bedouin community.

Israel's plan to demolish the village and relocate its 180 residents - Bedouins who scrape a living by raising sheep and goats - to a site 12 km (7 miles) away, has drawn criticism from Palestinians and some European states, who cite the impact on the community and prospects for peace.

The village is in the 60 percent of the West Bank known as Area C, which remains under exclusive Israeli control and is home to dozens of Israeli settlements. Israel places severe restrictions on Palestinian development there and home demolitions are not unusual. But the removal of an entire community would be extremely unusual.

Palestinians say the demolition is part of an Israeli push to create an arc of settlements that would effectively cut off East Jerusalem from the West Bank, territories Israel captured in the 1967 Middle East war and which the Palestinians seek for an independent state.