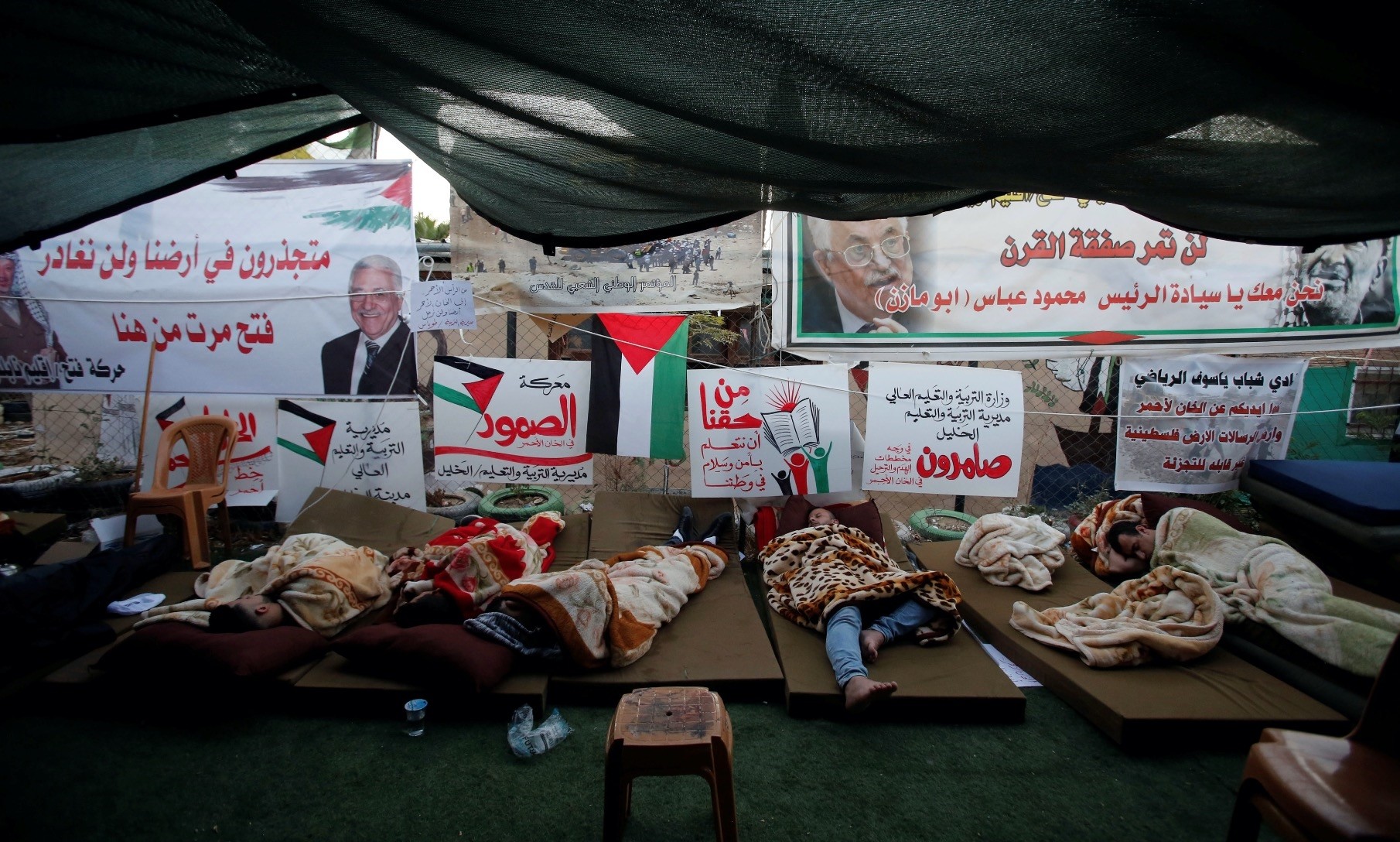 Activists protesting against Israelu2019s plan to demolish the Palestinian Bedouin village of Khan al-Ahmar, sleep in a tent in Khan al-Ahmar, in the occupied West Bank, Sept. 16.
by Associated Press Sep 17, 2018 12:00 am

For the anxious Palestinian residents of Khan al-Ahmar, there's little left to do but wait. After the West Bank hamlet lost its last legal protection against demolition late last week, Israeli forces could swoop in any day now to tear down the desert community's few dozen shacks and an Italian-funded schoolhouse made from recycled tires.

Some hold out hope that Israel might be deterred by an inevitable international outcry over razing the community. Major European countries have warned that flattening Khan al-Ahmar poses a grave threat to the already fading prospects of a two-state solution to the Israeli-Palestinian conflict.

eemingly outsized international attention being paid to the tiny community is linked to its strategic location in the center of the West Bank. It's an area deemed essential for setting up a viable Palestinian state in the West Bank, Gaza Strip and east Jerusalem, areas Israel captured in 1967.

Israel has portrayed the battle over Khan al-Ahmar as a mere zoning dispute. Critics of Prime Minister Benjamin Netanyahu's policies say the village has become a symbol for what they describe as an ongoing displacement of Palestinians to make room for Israeli settlements. With demolition now looming, dozens of activists, including foreigners, have been spending nights in Khan al-Ahmar to show support. They sleep on mattresses spread out under green tarp covering the front yard of the Italian-funded school.

"We cannot prevent demolition," said activist Mohammed Abu Hilweh, 30, from Jerusalem, as he stretched out on a mattress on a recent evening, settling in for the night. "But we can resist, delay and when it happens, we can rebuild," he said.

Khan al-Ahmar is located a few dozen meters from a four-lane highway that runs east-west, effectively slicing the West Bank in half at a narrow waist and linking Jerusalem with the Jordan Valley. The highway is also flanked by several Israeli settlements, including Maaleh Adumim, the West Bank's third largest. A new settlement across the highway from Maaleh Adumim, called E1 by Israeli planners, would effectively block the remaining land link between West Bank Palestinians and east Jerusalem, their hoped-for capital. Khan al-Ahmar sits just outside the area mapped for E1, which until now had largely been frozen under U.S. pressure.

Hanan Ashrawi, a senior Palestinian official, called the planned demolition a "blatant attempt" by Israel to separate the Palestinians from Jerusalem. "It is absolutely imperative that the international community intervene," she said.

For the past 25 years, the international community has favored the establishment of a Palestinian state alongside Israel as the best hope for peace. But those hopes are quickly fading.

In a departure from predecessors, President Donald Trump, who has promised a new peace plan, has refused to endorse the two-state solution while recognizing Jerusalem as Israel's capital, over Palestinian opposition. The U.S. State Department has said little about the looming demolition, referring reporters to the Israeli government for details.

By contrast, European governments have been outspoken. "The demolition of this small Palestinian village would not only affect a local community," EU foreign policy chief Federica Mogherini recently told the European Parliament. "It would also be a blow against the viability of the state of Palestine and against the very possibility of a two-state solution." Separately, France, Germany, Italy, Spain and the United Kingdom warned in a rare joint statement that demolition would have "very serious" consequences. For now, Israel appears to be moving ahead. After a decade-long legal battle, Israel's Supreme Court rejected a final appeal earlier this month. Late last week, a moratorium on demolition expired. Israel has not announced a date for the demolition, but earlier this week dismantled five corrugated metal shacks near Khan al-Ahmar that had been set up by villagers a few days earlier in a show of defiance. On Friday, troops returned with heavy equipment, removing earthen mounds set up to slow demolition. Two Palestinians and an American-French law professor were detained.

The 180 residents of Khan al-Ahmar are members of the Jahalin Bedouin tribe that has lived in the area since being expelled from the southern Negev Desert after Israel's establishment in 1948. The United Nations granted them refugee status.

Shani Sasson, a spokeswoman for COGAT, the Israeli defense body responsible for Palestinian civilian affairs, said Israel has offered to relocate the villagers. She said the tribe squats on land that is not safe for living, and that the Israeli government has prepared an alternative site just a few kilometers (miles) away with sewage treatment and access to water and electricity. She said Israel has invested over $2 million in the relocation project. "We are doing them a service," she said. "This is not against them, this is for them."

Residents acknowledge that life in their village is tough. But they say there is no place they would rather live. They say Israel is trying to move them to a site that will be too crowded for their livestock and that sits near a sewage facility and a garbage dump.

"We Bedouin people like the desert life," said Yousef Abu Dahouq, a Khan al-Ahmar resident, sitting on a wooden bench near the school, sipping tea and smoking a waterpipe. "We live next to each other, support each other." The Palestinians and Europeans see a deeper Israeli agenda. Khan al-Ahmar is in the 60 percent of the West Bank that is known as Area C and remains under full Israeli control, according to interim peace deals from the 1990s that are seemingly locked in place because of diplomatic paralysis. The remainder of the territory is administered by a Palestinian autonomy government.

Area C is home to about 400,000 Israeli settlers and an estimated 150,000 to 200,000 Palestinians. Israel places severe restrictions on Palestinian development while supporting and promoting dozens of settlements in the area.

The EU has attempted to build numerous structures for Palestinians in Area C, only to see them demolished or rejected because of a lack of hard-to-get permits. Khan al-Ahmar's Italian-funded school was built from car tires because a construction permit could not be obtained. "This is the situation on the ground: New settlements for Israelis are built, while Palestinian homes in the same area are demolished," said Mogherini. "This will only further entrench a one-state reality, with unequal rights for the two peoples, perpetual occupation and conflict." The village chief, Eid Khamis, promised to put up a fight. "They want to kick us out and build settlements and we will not let that happen," he said. "It's our land."