Palestinian dies hours after being detained by Israeli troops in W. Bank 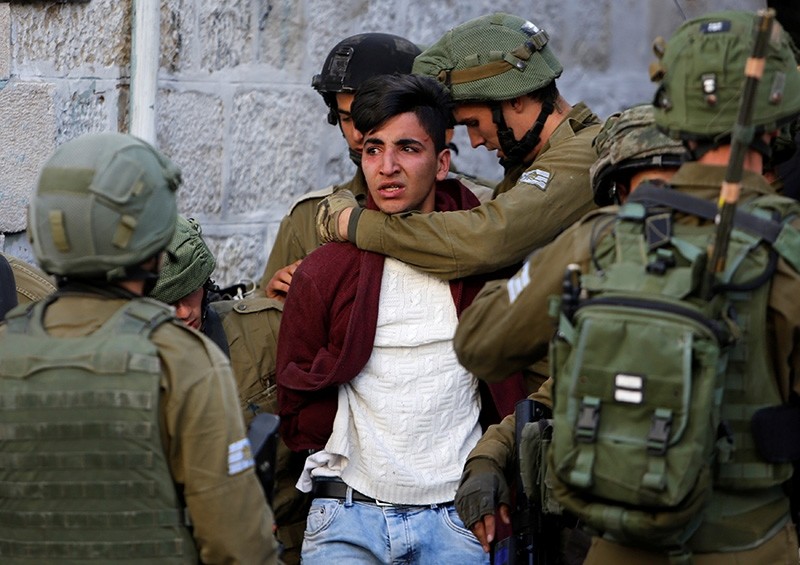 Israeli soldiers detain a Palestinian during clashes at a protest against U.S. President Donald Trump's decision to recognize Jerusalem as the capital of Israel, in the West Bank city of Hebron, Dec. 10, 2017. (Reuters Photo)
by Compiled from Wire Services Sep 18, 2018 12:00 am

A Palestinian youth on Tuesday died within hours of being detained by Israeli army troops in the occupied West Bank, according to members of the young man's family.

Relatives of Mohamed al-Rimawi, 21, said the Israeli army had informed them of the young man's death only hours after taking him from his home in the West Bank town of Beit Rima.

According to family members, al-Rimawi was beaten while in custody.

"The army apprehended a Palestinian suspected of hostile activities in Beit Rima during the night," an army spokeswoman told AFP, referring to a village north of Ramallah in the occupied West Bank.

"He was arrested without violence or resistance from his part. He lost consciousness and was treated by Israeli soldiers at the scene."

He died later in hospital, she added.

The military did not provide further details on the reasons for his arrest.

Rimawi's brother Bashir told AFP by phone that the army had raided the house in the early hours of Tuesday morning.

"They entered Mohammed's room while he was sleeping, and they beat him violently and we heard screaming," he said.

"After a while he went silent, and a soldier carried him out on his back."

It said it held Israel responsible for his death.

An estimated 6,500 Palestinians currently languish in Israeli prisons, including scores of women, hundreds of minors and at least six lawmakers.