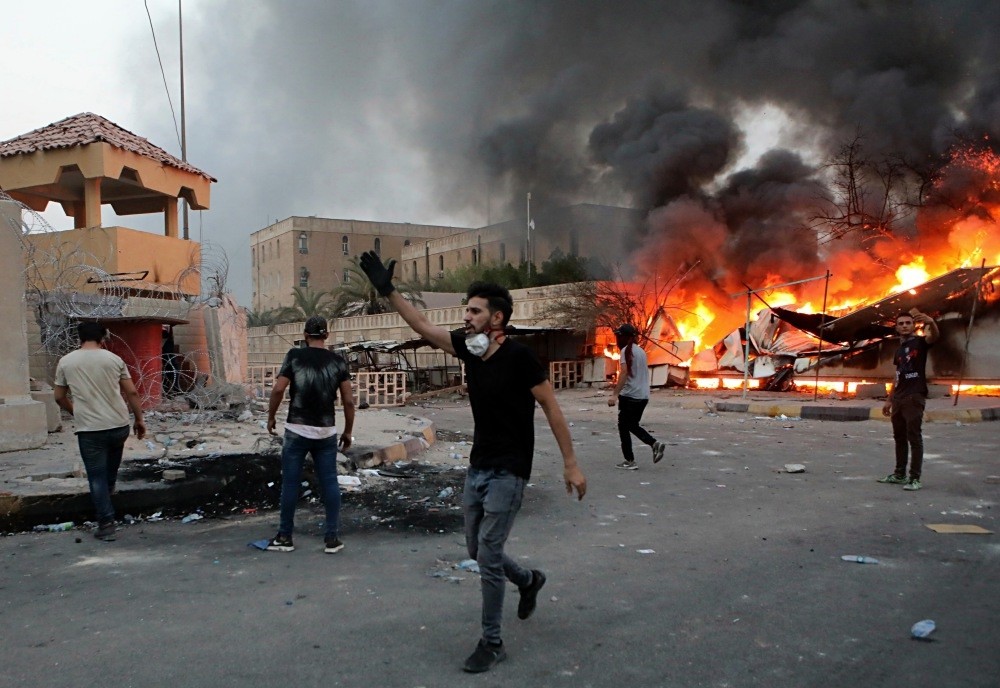 Weeks of violent protests in the streets of Iraq's oil-exporting capital, Basra, has threatened to spread to other cities.
by Yusuf Selman İnanç Sep 18, 2018 12:00 am

Apart from the latest incidents in Basra, where Iran and the U.S. have accused each other of inciting violence, the election of a new parliamentary speaker, whose ties with Iran are strong, may lead to the formation of a pro-Iran government and increased tension between the two countries

When thousands of protesters in Iraq's Basra took up the streets and stormed government buildings, many of their slogans were against Iran. The increasing outrage resulted in the torching of the Iranian consulate. Although the protesters' main target was the Iraqi government, which has failed to cope with the water pollution, high rates of unemployment and lack of infrastructural facilities, the U.S. has also expressed its concern over the security of its personnel, accusing Iran of mobilizing its proxies. Similarly, Iran and its proxy groups in Iraq have claimed that the U.S. was behind the protests.

Amid the escalating tension between the two countries over the reimposition of the economic sanctions, not only the incidents in Basra but also other recent developments have proven that Iraq has forced Iran and the U.S. to directly interact.

When the U.S. invaded Iraq 15 years ago, the Shiite majority country was ruled by a group of Sunni elite under the leadership of the brutal dictator Saddam Hussein. Iran had no access to Iraqi politics and its efforts to mobilize the Shiite groups had consistently failed; yet, the invasion brought about a chance for Iran as the U.S. also preferred to ally with the Shiite groups, which easily fell under Iranian influence. Over time, Iraq has become Iran's backyard.

Iranian goods are everywhere in the country. Iranian TV channels, broadcast in Arabic, are widely watched. Iranian military advisers are effective in the Iraqi army. Moreover, the use of sectarianism as a unifying instrument is crucial for Iran's policies. That being said, the U.S. has also built its influential zone, intervening in the domestic policies of the country as well as handling its energy resources. Daesh's occupation of several Iraqi cities was thwarted largely thanks to the U.S.' support despite the presence of Iran's proxies. In short, the struggle between the U.S. and Iran over Iraq is not new. But what is new is that the two countries have started expressing their disappointment about the presence of the other.

Iraqi Prime Minister Haider al-Abadi, who took office after an explicit Iran supporter Nouri al-Maliki, was considered to be a balance between the two. It is arguable whether he was successful or not but in the last elections, his party lost the majority in Parliament. Although the new government has not been established yet due to a political deadlock, the election parliamentary speaker Muhammad al-Halbusi was an important step.

Although he is Sunni, he is known for his close ties to Iran. Abadi's coalition failed to get its candidate elected, while Halbusi was supported by Hadi al-Ameri's Conquest Alliance, a coalition of former paramilitary fighters. Now, Iraqi lawmakers must find a new president and ask the leader of the largest bloc to form a government as prime minister. Although there is no dominating bloc yet, it is likely that any bloc with potential to form a government will have close ties to Iran.