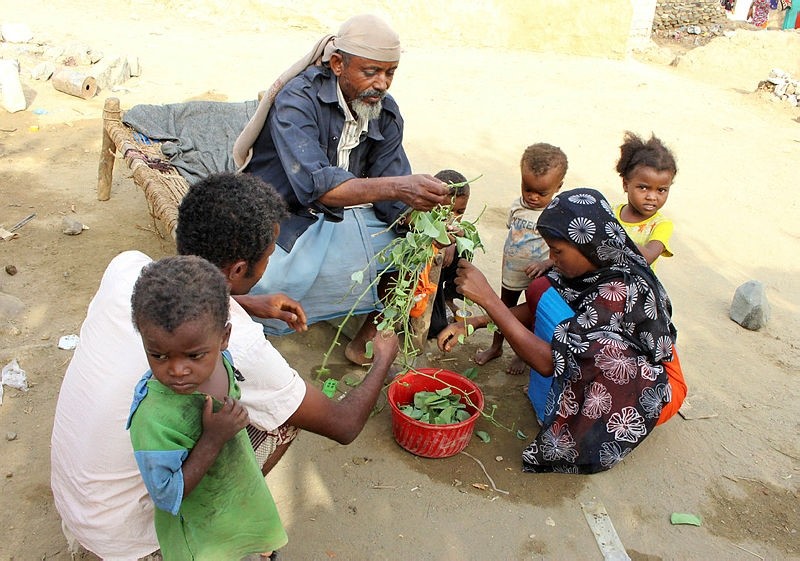 A man feeds children in Aslam, Hajjah, Yemen. Yemenis in the isolated pocket in the north have been reduced to eating boiled leaves from a local vine to stave off starvation, with no aid reaching many families who need it most. (AP Photo)
by Compiled from Wire Services Sep 19, 2018 12:00 am

The lives of hundreds of thousands of Yemeni children hang in the balance as the Saudi coalition’s renewed attack further fuels the humanitarian crisis in the war-torn country, a human rights charity reported

Fears were growing of a humanitarian crisis in Yemen after Saudi-backed government forces launched a series of attacks on rebel-held Hodeida, as a charity warned Wednesday that more than 5 million children were at risk of famine in the war-torn state.

British-based charity Save the Children said an extra one million children now risk falling into famine as prices of food and transportation rise, bringing the total to 5.2 million.

Disruption to supplies coming through the embattled Red Sea port of Hodeida could "cause starvation on an unprecedented scale," the British based NGO said in a new report.

Any type of closure at the port "would put the lives of hundreds of thousands of children in immediate danger while pushing millions more into famine," it added.

Impoverished Yemen has been mired in deadly conflict between Shiite Houthi rebels and troops loyal to President Abedrabbo Mansour Hadi since 2014.

A Saudi-led alliance intervened in 2015 in a bid to bolster the president, accusing Iran of backing the Houthis, but nearly 10,000 people have since been killed.

Deadly clashes resumed around the Houthi-held port city of Hodeida following the collapse of talks in Geneva earlier this month.

"Millions of children don't know when or if their next meal will come," said Helle Thorning-Schmidt, CEO of Save the Children International.

"In one hospital I visited in north Yemen, the babies were too weak to cry, their bodies exhausted by hunger.

"This war risks killing an entire generation of Yemen's children who face multiple threats, from bombs to hunger to preventable diseases like cholera," she added.

The U.N. food agency, the World Food Programme (WFP) also said yesterday time was running out for aid groups working in Yemen to prevent a "devastating" famine in the country. The WFP said that new entry points were urgently needed to bring in humanitarian food aid and commercial imports and to address what it called a "growing hunger crisis" across the impoverished Arab nation.

The Norwegian Refugee Council has warned that more people will be killed by economic problems than by bombs and guns after food prices doubled in some parts of the country this month.

U.N. figures show the number of Yemenis who face starvation without aid has risen to 8.4 million. That number is likely to soon jump by another 3.5 million because of the national currency's falling value.

Yemen has been wracked by conflict since 2014, when Shiite Houthi rebels overran much of the country. Saudi Crown Prince Mohammed bin Salman, the former defense minister, and Saudi Arabia's allies launched Operation Decisive Storm in March 2015. Riyadh has accused the rebel group of serving as a proxy force for Iran, Saudi Arabia's arch foe in the region.

Saudi Arabia and the United Arab Emirates (UAE) may have been responsible for war crimes in Yemen, U.N. investigators said in a report revealed last month, highlighting deadly air strikes, rampant sexual violence and the recruitment of young children as soldiers during three years of escalating conflict. The U.N. Human Rights Council also urged the international community to "refrain from providing arms that could be used in the conflict" – an apparent reference to countries, including the United States and Britain, that help arm the Saudi-led coalition, as well as Iran, which the coalition has accused of arming the Houthis. The experts visited some but not all parts of Yemen as they compiled the report.