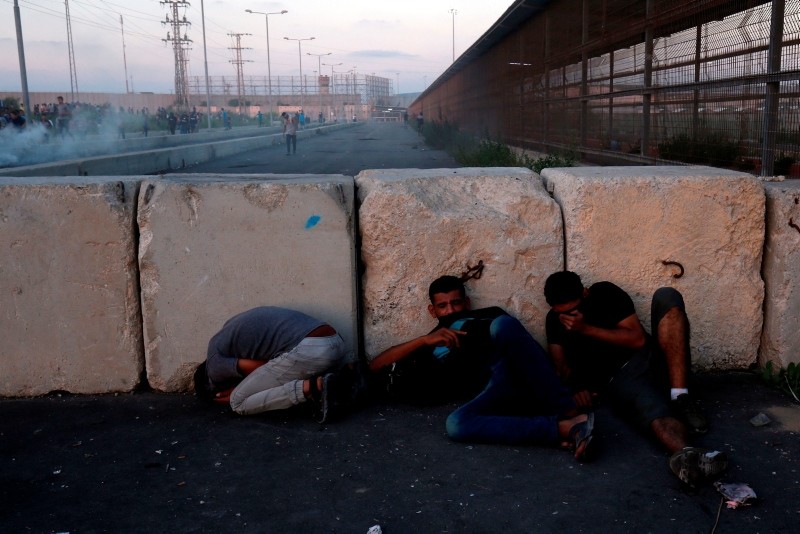 Palestinian protestors take cover during a demonstration at the Erez crossing with Israel on September 18, 2018, in the northern Gaza Strip. (AFP Photo)
by Compiled from Wire Services Sep 20, 2018 12:00 am

Israeli forces opened fire during a demonstration in the southern Gaza Strip on Wednesday, killing a Palestinian youth, the Palestinian health ministry said.

An Israeli military spokeswoman said troops came under attack on the border fence in the southern Gaza Strip, stones and firebombs were thrown at them and they responded with "riot dispersal means". Live rounds were fired according to "open-fire regulations", she said.

Ashraf al-Qidra, a spokesman for Gaza's health ministry, said 15-year-old Moamen Ibrahim Abu Eyada was shot dead by Israeli soldiers east of the town of Rafah, which lies at the southern end of the Gaza Strip and borders Egypt.

Earlier on Wednesday, al-Qidra said that 13 Palestinians were injured during evening clashes between Palestinian demonstrators and Israeli soldiers east of the central Gaza Strip town of Deir el-Ballah.

There have been almost daily clashes recently on the border between the Gaza Strip and Israel.

Palestinians have been staging marches along the Gaza border since March, calling for an end to the Israeli blockade of Gaza and other demands. Israel says the marches are masked attempts by the Hamas group that controls Gaza to carry out attacks on the border area.

At least 182 Palestinians have been killed in the protests, according to Palestinian health officials.

Peace talks between Israel and the Palestinians have been stalled since 2014.