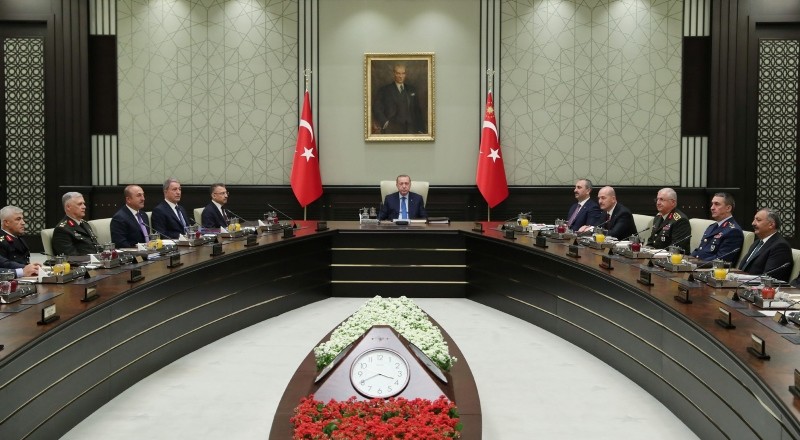 It called on international community to fulfill its political and humanitarian responsibilities more quickly and effectively.

A statement by the council also added that Turkey and Russia's deal for ensuring a cease-fire in the contested Syrian province of Idlib is crucial.

The recent agreement signed between Turkey and Russia, which foresees preserving the de-escalation zone in the northwestern province of Idlib, has been praised internationally and has also been embraced by locals as it has lessened their concerns of a possible humanitarian disaster.

Turkey expects the implementations of an agreed roadmap to clear Syrian city of Manbij from the terrorist organization, it added.

The Manbij deal between Turkey and the U.S. focuses on the withdrawal of the People's Protection Units (YPG) from the city in order to stabilize the region.

On Tuesday, a U.S. military spokesman said Washington is sticking to its agreement with Turkey on a roadmap for the northern Syrian city of Manbij, and not including the YPG.

Col. Sean J. Ryan, the spokesman for the U.S.-led Combined Joint Task Force, emphasized there are little elements of the YPG left in the area.

"As far as I'm tracking, there's very little YPG if any at all. And we are adhering to that agreement that the YPG will not be part of Manbij," Ryan told Anadolu Agency.

Both countries conducted more than 40 rounds of separate coordinated patrols in the region between areas liberated by Turkey's Operation Euphrates Shield and Manbij, according to Turkish officials.

Separate patrols in the region began June 18, however, joint patrols have yet to be conducted.

Turkey has ramped up its anti-terror operations abroad recently. With Turkish warplanes conducting airstrikes against the PKK and its Syrian wing YPG, the National Intelligence Organization (MIT) has also brought home many terror suspects including those with ties to Gülenist Terror Group (FETÖ).