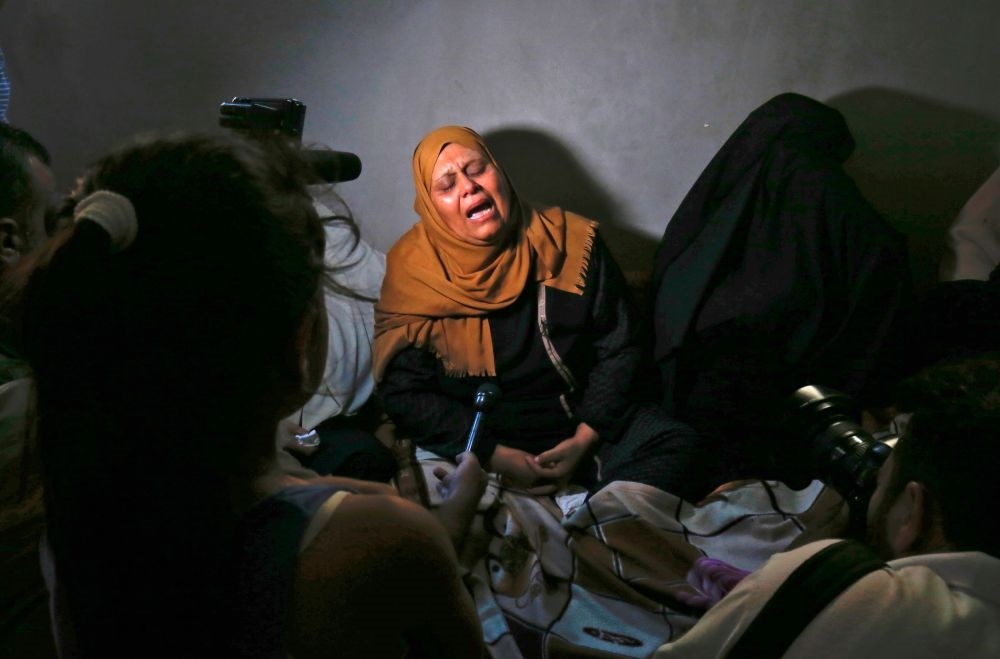 The mother of Palestinian Ahmed Omar, who was killed during a protest near the Israeli Erez crossing with the Gaza Strip, mourns on Sept. 19.
by Compiled from Wire Services Sep 21, 2018 12:00 am

Over 48 hours, five young Palestinians were killed by the Israeli army, revealing Israel's ongoing use of live ammunition against unarmed Palestinian protesters

Israeli forces opened fire during a demonstration in the southern Gaza Strip on Wednesday, killing a Palestinian teen, the fifth young Palestinian killed by the Israeli army within two days.

In a statement, Gaza's Health Ministry said the 15-year-old boy Mumin Abu Iyada had been shot in the head by Israeli troops during a rally as part of the Great Return March at the eastern fence of Gaza's southern town of Rafah. An Israeli military spokeswoman said troops responded with "riot dispersal means." Live rounds were fired according to "open-fire regulations," she said, as reported by Reuters.

The incident occurred on the same day as thousands of Palestinians in the Gaza Strip took part in the funerals of four young Palestinians recently killed by the Israeli army near the Gaza-Israel buffer zone.

Palestinians in the strip's southern city of Khan Younis bid farewell to Naji Abu Assi, 18, and Alaa Abu Assi, 21, both of whom were killed earlier this week by Israeli artillery shelling. While in the town of Beit Lahiya in the northern Gaza Strip, hundreds performed funeral prayers for Mohamed Abu Naji, 34, who was also recently martyred near the fraught buffer zone. In the Shati refugee camp west of Gaza City, meanwhile, dozens of local residents performed funeral prayers for Ahmad Omar, 20, another Palestinian youth slain by Israeli army gunfire.

Since March 30, thousands of Palestinians have taken part in ongoing rallies along the buffer zone, to which the Israeli army has responded with deadly force. Israel has faced international criticism for its response to the mass marches. Rights groups have branded open-fire orders as unlawful, saying they effectively permit soldiers to use potentially lethal force against unarmed protesters. In the face of growing criticism over Gaza border violence, the Israeli authorities earlier said that human rights laws do not apply to ongoing Palestinian protests along the Gaza Strip.

The Great Return March began on March 30, when hundreds of thousands of Palestinian demonstrators converged on the buffer zone separating Gaza from Israel. Israel has responded to the rallies, still held every Friday, with deadly force, killing more than 150 protesters until now and injuring thousands more. Israel was criticized by a U.N. human rights body for its killing of protesters in Gaza and treatment of Palestinians, declaring it a "war crime" under the Statute of Rome. The high casualty toll triggered a diplomatic backlash against Israel and new charges of excessive use of force against unarmed protesters.

Israel withdrew its troops and settlers from Gaza in 2005 but maintains tight control of its land and sea borders and has fought three wars there in the past decade against Palestinian resistance group, Hamas, who control the territory. With Egypt, Israel has imposed a blockade that the World Bank says has brought Gaza's economy to crisis, leaving Gazans with limited access to health care, clean water and electricity. Peace talks between Israel and the Palestinians have been stalled since 2014.