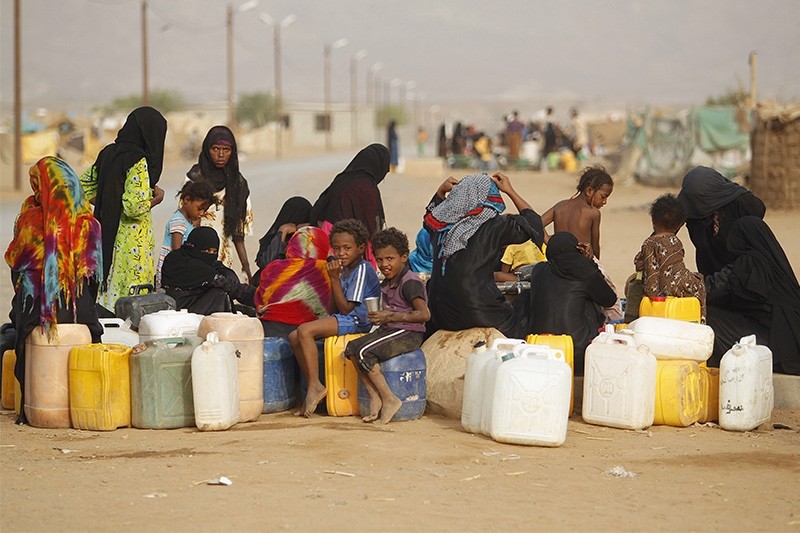 Women and children gather to collect water from a tap at a camp for internally displaced persons (IDPs) in al-Mazraq in the northwestern Yemeni province of Hajja May 20, 2013. (Reuters Photo)
by Sep 24, 2018 12:00 am

A Saudi-led military alliance fighting in Yemen said Monday it would open humanitarian corridors between two key rebel strongholds — the Red Sea city of Hodeida and the capital Sanaa — in coordination with the U.N.

"The coalition is working with (U.N. humanitarian agency) OCHA in Yemen to establish safe humanitarian corridors to help in the delivery of aid... between Hodeida and Sanaa," coalition spokesman Turki al-Maliki told reporters in Riyadh.

The coalition aims to open three corridors on different routes between the cities for the transportation of humanitarian aid between 6:00 a.m. and 6:00 p.m. daily, Maliki said without specifying a date.

An OCHA statement to AFP confirmed the organization was in "ongoing discussions with the coalition and other stakeholders on safe, reliable access routes into and out of Hodeida", but did not give details on the number of routes under discussion.

The coalition, led by Saudi Arabia and the UAE, last week renewed a large-scale offensive on Hodeida, raising fears of a deepening humanitarian crisis.

The coalition launched a major operation to retake Hodeida in June, which was put on hold for 11 weeks as the United Nations struggled to bring warring parties to peace talks in Geneva.

But the talks failed to get off the ground after the Huthis refused to attend over what they said was the United Nations' failure to guarantee a safe return to Sanaa.

Hodeida's port is a vital lifeline for aid shipments to Yemen, the most impoverished country in the Arab world.

The U.N. has warned that any major fighting could halt the distribution of food to eight million Yemenis who depend on aid to survive.