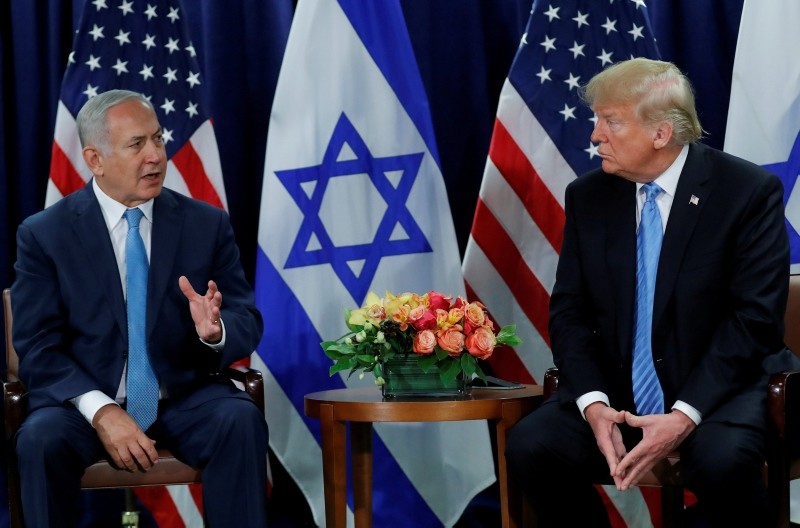 U.S. President Donald Trump waded into thorny Middle East politics while at the United Nations on Wednesday, endorsing the two-state solution to bring an end the decadeslong conflict between Israel and the Palestinians while poised to denounce the dangers posed by Iran.

"I like two-state solution," Trump said in his most clear endorsement of the plan. "That's what I think works best."

Meeting with Israel Prime Minister Benjamin Netanyahu, Trump indicated that moving the embassy was "a big chip" the U.S. delivered to the Israelis.

"I took probably the biggest chip off the table. And so obviously they have to start you know we have to make a fair deal. We have to do something. Deals have to be good for both parties."

Trump said he believed that the embassy "was always the primary ingredient as to why deals couldn't get done."

"Now that's off the table," Trump said. "Now that will also mean that Israel will have to do something that is good for the other side."

Netanyahu responded by saying that Israel must retain security control in any peace deal with Palestine, Israeli media reported.

Speaking to Israeli journalists after meeting Trump in New York on the sidelines of the U.N. General Assembly, Netanyahu reiterated his stance that Israel must control security west of Jordan to the Mediterranean -- which includes the occupied West Bank.

"It is important to set what is inadmissible to us: Israel will not relinquish security control west of Jordan. This will not happen so long as I am prime minister and I think the Americans understand that."

As in the past, Netanyahu did not specify whether he could support full Palestinian statehood in a peace deal or some lesser form of autonomy.

A key Israeli government minister and Netanyahu rival said after Trump's comments that a Palestinian state was out of the question.

"The president of the U.S. is a true friend of Israel," Education Minister Naftali Bennett of the far-right Jewish Home party said on Twitter.

"However, it must be emphasized that as long as the Jewish Home party is part of Israel's government, there will not be a Palestinian state which would be a disaster for Israel."

The two-state solution is mostly aspirational. Ongoing conflict between Israel and Palestinians over the division of territory, borders and governance has spawned violence going back years and long stymied Mideast peace efforts.

Moving the embassy from Tel Aviv triggered considerable protest from the Palestinians and expressions of condemnation from many American allies who worried about further violence that could destabilize the fragile region. Trump said that his administration's peace plan, in part helmed by his son-in-law senior adviser Jared Kushner, would be released in the coming months.

Trump's meeting with Netanyahu came, symbolically, just ahead of his chairing a meeting of the U.N. Security Council about nuclear proliferation. The president had suggested, in a recent tweet, that Iran could be his focus, and he unloaded harsh rhetoric the day before on the nuclear-aspirant nation as a persistent malign influence across the Middle East.

"We ask all nations to isolate Iran's regime as long as its aggression continues," said Trump on Tuesday. The president has removed the U.S. from the 2015 nuclear accord with Iran, citing the country's destabilizing actions throughout the region and support for terrorist groups like Hezbollah, and he accused its leaders on Tuesday of sowing "chaos, death and destruction."

His national security adviser, John Bolton, went even further in a speech Tuesday, issuing a dire warning to Iran: "If you cross us, our allies or our partners; if you harm our citizens; if you continue to lie, cheat and deceive, yes, there will indeed be hell to pay," Bolton said.