US too 'biased' to be lone mediator, Palestine's Abbas tells UN 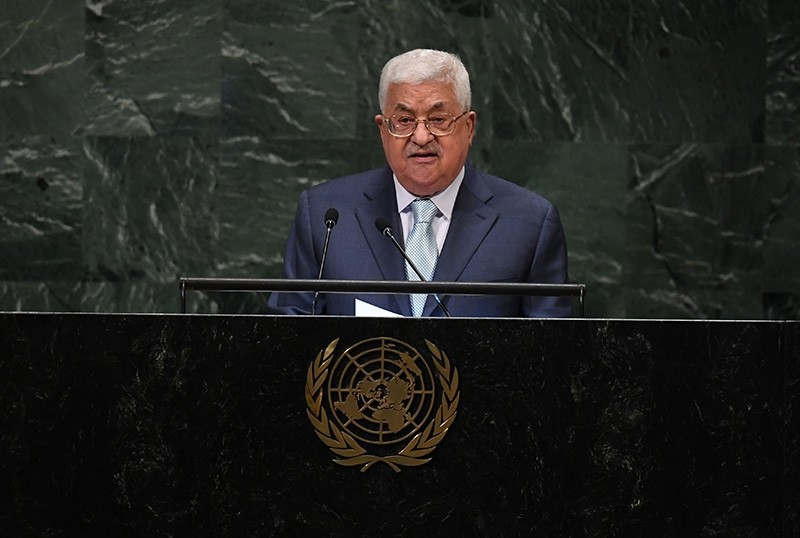 Palestinian President Mahmoud Abbas urged the members of the United Nations on Thursday to work toward a political solution to the conflict with Israel, calling the United States too "biased" to serve as a lone mediator.

Abbas said economic and humanitarian support in the occupied West Bank and Gaza cannot be a substitute for a political situation to the conflict with Israel.

He also stated that the Trump administration has undermined the two-state solution.

Abbas called on U.S. President Donald Trump to rescind his decisions recognizing Jerusalem as the capital of Israel and cutting aid to the Palestinians, which he said had undermined the two-state solution to the Middle East conflict.

"Jerusalem is not for sale," Abbas said to applause as he began his speech at the annual U.N. General Assembly. "The Palestinian people's rights are not up for bargaining."

He said Palestinians would never reject negotiation, but that "it's really ironic that the American administration still talks about what they call the 'deal of the century.'"

"What is left for this administration to give to the Palestinian people?" he asked. "What is left as a political solution?"

"With all of these decisions, this administration has reneged on all previous U.S. commitments, and has undermined the two-state solution," Abbas said.

"I renew my call to President Trump to rescind his decisions and decrees regarding Jerusalem, refugees and settlements."

Abbas said the U.S. has "reneged on its agreements," and for that reason, Palestine cannot uphold their end of the deal.

"The U.S. cannot be a mediator alone because it is too biased toward Israel," he said, adding that Washington could join the quartet of states working toward a solution.

Abbas said the Palestinian people would not resort to violence despite broken promises by the U.S. and Israel.

He said, "We are not redundant. Why are we treated as redundant people who should be gotten rid of?"

Abbas halted ties with Trump's administration in December after the U.S. recognized contested Jerusalem as Israel's capital, and Palestinians have said a pending U.S. peace plan will be dead on arrival because of that and other recent U.S. moves that have favored Israel.

Trump made his comment about the two-state solution while meeting with Netanyahu on Wednesday. The U.S. president told reporters he believes that two states — Israel and one for the Palestinians — "works best." He has been vague on the topic, suggesting he would support whatever the parties might agree to, a message he also recapped Wednesday.

Netanyahu has reluctantly accepted the concept of Palestinian statehood but has since backtracked. A top coalition partner is threatening to topple his government if it returns to the agenda.

The two sides in one of the world's most high-profile and volatile conflicts are always forceful voices at the U.N. and its annual General Assembly, but their leaders are speaking after a particularly eventful year in their relations.

Trump's decision to recognize Jerusalem as Israel's capital brought tensions to a new high in December. Earlier this year, Trump followed up on the recognition by moving the U.S. Embassy in Israel from Tel Aviv to Jerusalem, a step that was widely protested by Palestinians and others in the Muslim world.

His administration has also slashed aid to Palestine by hundreds of millions of dollars and ended U.S. support for the U.N. agency that helps Palestinian refugees.

The World Bank warned Tuesday that Gaza's economy is in "free fall," with a 6 percent contraction in the first quarter of this year and unemployment standing at over 50 percent. A report from the bank urged Israel and the international community to take action to avoid "immediate collapse."

It attributed the downturn to a combination of factors, including Israel's decade-long blockade of the Hamas-controlled territory, budget cuts by the rival Palestinian Authority and a reduction in international aid, particularly from the U.S.