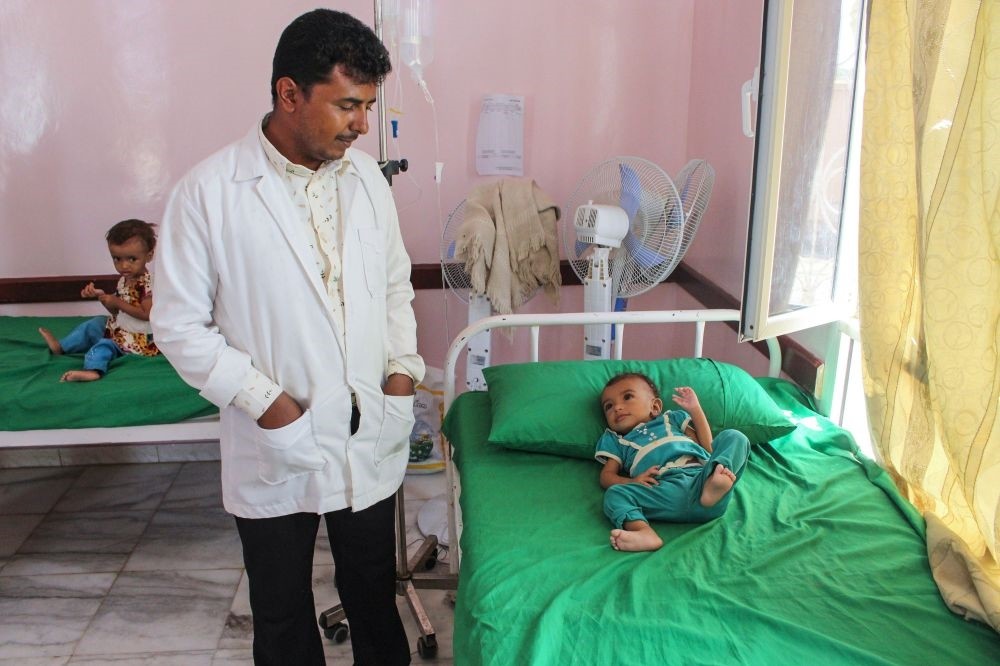 A hospital staffer looks at a Yemeni child suffering from malnutrition lying on a bed at a hospital in the northern district of Abs in the northwestern Hajjah province, Sept. 19.
by Yusuf Selman İnanç Sep 27, 2018 12:00 am

As the war in Yemen continues, the number of civilian deaths has increased by 164 percent amid Saudi-led efforts to take control of a major Yemeni port city

A deadly war has been going on in the Middle East's poorest country where Iran-backed Shiite Houthi militants and the Saudi-led coalition have been battling each other for more than four years. Despite the fact that the warring parties are in an endless bloody conflict, neither side is willing to find a diplomatic solution. As a result, civilians, regardless of their sect or belief, face the biggest challenge.

During the United Nations meeting in New York, which is being held this week, a report was published, revealing that 116 people are killed every day.

Saudi Arabia and its coalition partners believe that it will be a major blow to the Houthi groups if Hodeidah is captured. The town has strategic significance as it enables the rebels to receive material aid from abroad. The town is located near the Red Sea opposite Eritrea. It is alleged that due to the lack of state authority in both Yemen and Eritrea's coastal areas, it is easy to deliver weapons and other necessary war materials. Houthi rebels have been controlling Hodeidah since 2015.

The battle over Hodeidah brings about a cost to the Yemeni people. International Rescue Committee's Yemen Country Director Frank McManus said, "August was the most violent month of 2018 in Yemen with nearly 500 people killed in just nine days. The impact of the war on civilians is difficult to comprehend but easy to quantify. Since 2015 the coalition has undertaken 18,000 airstrikes – one every 99 minutes – a third of which have hit non-military targets."

The data, provided by United Nations Children's Fund (UNICEF) is disappointing as well for demonstrating the humanitarian cost of the war. According to UNICEF, 78.5 percent of Yemenis are in need of humanitarian assistance. That means that 22 million of the 28 million need humanitarian aid. Remarkably, half of this number refers directly to children. In other words 11 million children are waiting for aid.

The Yemeni people face other critical problems such as a lack of access to clean water, electricity, food and so forth. In some besieged areas, children can be seen starving to death. UNICEF also says at least five million Yemenis are affected by water-related diseases.

There are strong claims that war crimes have been committed in Yemen. Investigators appointed by the United Nations a year ago said on Wednesday that the situation in Yemen was "alarming" and the probe had to continue. However, Saudi Arabia and the Saudi-backed Yemeni Cabinet refused the claims, calling the investigators' findings "biased and politicized."