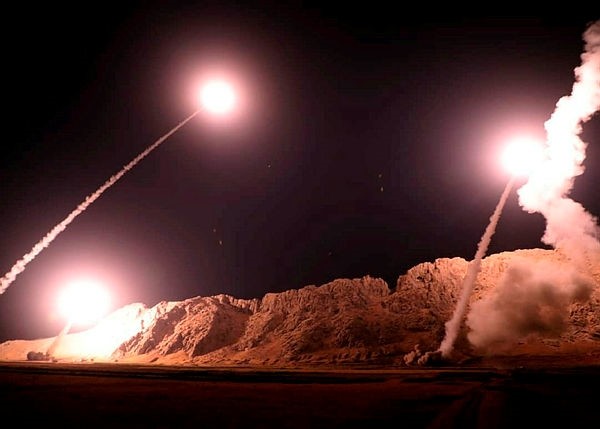 In this photo released on Monday, Oct. 1, 2018, by the Iranian Revolutionary Guard, missiles are fired from city of Kermanshah in western Iran targeting DAESH terrorists in Syria. (AP Photo)
by Daily Sabah with Wires
Oct 01, 2018 12:00 am

Iran launched ballistic missiles into eastern Syria targeting the militants that the force has blamed for a recent attack at a military parade in southwestern Iran on Sept. 22, Iran's Revolutionary Guards said Monday.

Strong explosions shook the area in the early hours Monday, reverberating east of the Euphrates River, according to Head of Britain-based Syrian Observatory for Human Rights, Rami Abdurrahman.

The ballistic missiles used in the attack flew 570 km (354 miles) to hit the targets, the Guards said.

The area of Hajin and Daesh terrorists there have been under attack for weeks by U.S.-backed terrorist People's Protection Units (YPG) fighters.

"Our iron fist is prepared to deliver a decisive and crushing response to any wickedness and mischief of the enemies," the Guards said in the statement.

The Ahvaz National Resistance, an Iranian ethnic Arab separatist movement, and Daesh have both claimed responsibility for the attack in which 25 people were killed.

Neither group has presented conclusive evidence to back up their claim.

The Revolutionary Guards, the most powerful security force in Iran, said in the statement six missiles were fired into Syria from western Iran.

Seven drones were also used to bomb militant targets during the attack, which killed a number of militant leaders and destroyed supplies and infrastructure used by the group, the Guards said.

Twelve Guards were among those killed in the attack on Sept. 22, when gunmen fired on a viewing stand as military officials watched a ceremony in the city of Ahvaz marking the start of Iran's 1980-1988 war with Iraq.

Supreme Leader Ayatollah Ali Khamenei, the highest authority in Iran, said last week that the militants responsible were paid by Saudi Arabia and the United Arab Emirates (UAE) and that Iran would "severely punish" those behind the violence.

Saudi Arabia and the UAE have denied involvement in the attack.

Fars News posted video footage of several missiles streaking into a dark sky during the attack.

"Death to the family of Saud," "Death to America," and "Death to Israel" were written on one of the missiles shown on the Fars News site.

In Monday's statement, the Guard said that based on evidence from the Ahvaz attack, the "terrorists" in eastern Syria are supported and guided by the United States in line with "satanic" plans of the White House, the Zionist regime — Iranian parlance for Israel — and a regional power, a reference to Saudi Arabia.

Last year, the Guards fired missiles at Daesh militants in Syria after the group claimed responsibility for an attack on the parliament in Tehran and the mausoleum of the founder of Iran's revolution, Ayatollah Ruhollah Khomeini, that left at least 18 people dead and dozens wounded.