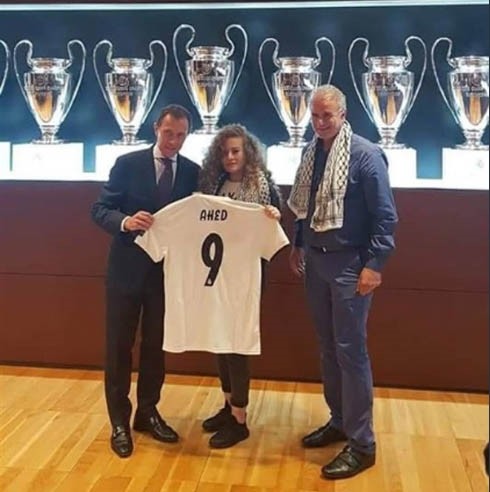 Palestinian teenage protest icon Ahed Tamimi was honored by the top football club Real Madrid on Saturday on a visit to Spain.

The 17-year-old was arrested in December and imprisoned for eight months after she slapped two Israeli soldiers outside her family home. Her mother filmed the incident and posted it on Facebook, where it went viral and, for many, instantly turned Ahed into a symbol of resistance to Israel's half-century-old military rule over the Palestinians.

She was given a Real jersey with "Ahed" and the No. 9 – generally used by strikers – on the back. 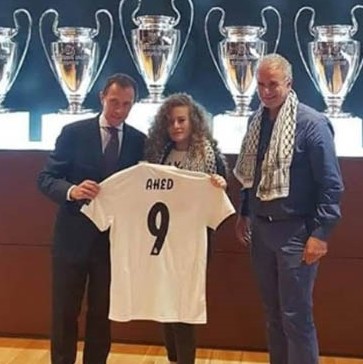 In the photos with Butragueno, Ahed poses in front of the club's Champions League trophies.

Ahed was invited to the Santiago Bernabeu stadium amid a visit to Spain this week with her father to participate in various social and political events.

She has been speaking at events in Spain to raise awareness of the plight of the Palestinians under Israeli occupation.

Israel's Ambassador to Spain Daniel Kutner accused the club of encouraging "aggression" by welcoming Ahed, who a spokesman for the foreign ministry called a "terrorist" in his own complaint.

Fans and supporters of Palestine, however, welcomed the gesture by the 13-time European champions.

Ahed was 16 when she was arrested and turned 17 in custody. Her case has trained a spotlight on the detention of Palestinian minors by Israel, a practice that has been criticized by international rights groups. Some 300 minors are currently being held, according to Palestinian figures.