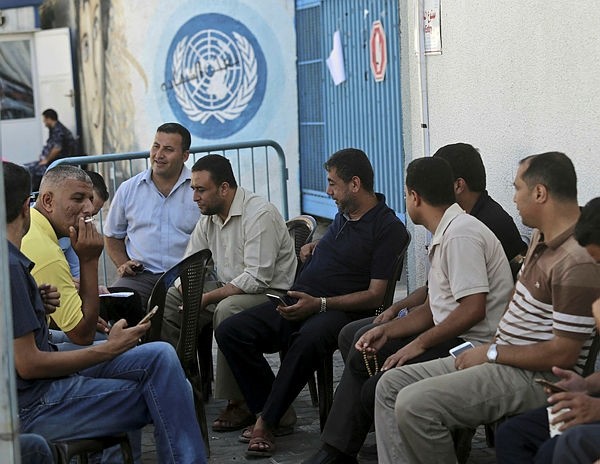 Palestinian employees of the United Nations Relief and Works Agency (UNRWA) take part in a sit in, in front of the agency's headquarters in Gaza City on October 2, 2018, to protest against job cuts announced by the UNRWA. (AFP Photo)
by Anadolu Agency
Oct 02, 2018 12:00 am

"We announce a general strike in all educational, health, and relief institutions and all UNRWA facilities in protest of the agency's downsizing measures and their failure to meet our demands," Amir al-Misshal, head of the UNRWA employees union in Gaza, told Anadolu Agency.

He said the two-day strike will continue until Wednesday.

Al-Misshal said the UNRWA administration "was pushing the union to go into an open-ended strike".

"We are pursuing our peaceful and legitimate steps until we regain our rights," he said.

In late July, an UNRWA spokesman announced that the agency -- which continues to suffer from chronic funding shortfalls -- would not renew the contracts of more than 100 staff members in Gaza.

According to the employees' union, funding cuts have forced the agency to close its mental health program, which had provided direct services to Palestinian refugees in Gaza and had employed about 430 people.

UNRWA has also terminated the contracts of dozens of its engineers in recent months, union officials have said.

Late in August, the U.S. announced that Washington would "no longer commit funding" to the refugee agency.

The U.S. had been UNRWA's largest contributor by far, providing it with $350 million annually -- roughly a quarter of its overall budget.