Peace, stability fade away in Gaza as multiparty disputes surface 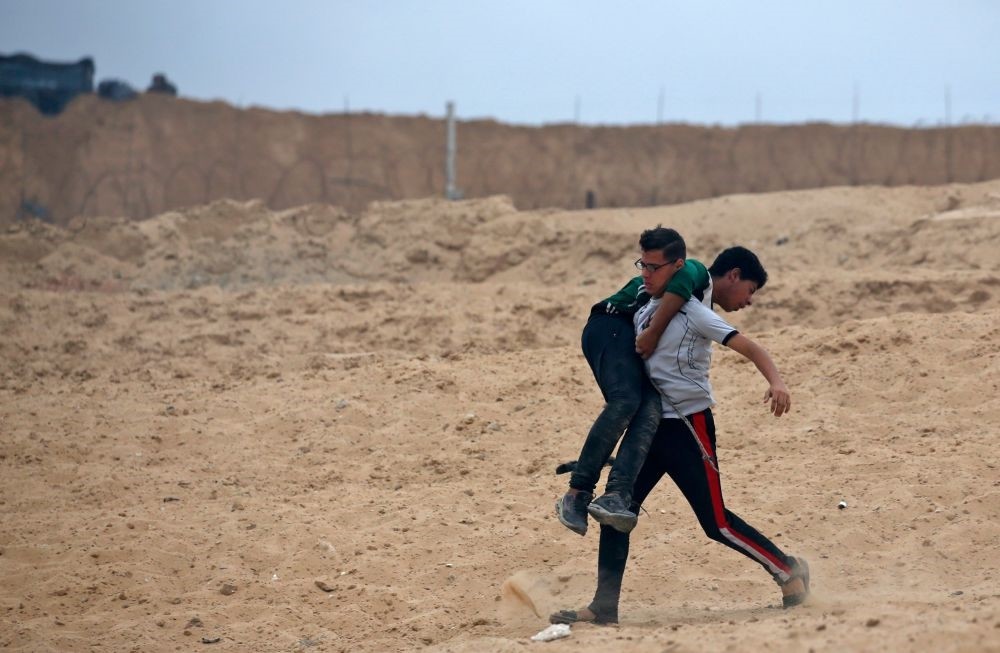 A Palestinian protestor carries a young boy who was injured during a demonstration on a beach near the maritime border with Israel in the northern Gaza Strip, Oct. 1.
by Yusuf Selman İnanç
Oct 03, 2018 12:00 am

Despite hopes that the fate of Gaza would be changed through a deal between Hamas and Israel combined with an internal reconciliation process, recent developments indicate that tensions may increase again

The opportunity for peace is fading away as recent developments in Gaza are undermining the potential of a multiparty deal, which may bring or might have brought stability to the surrounded strip. Hamas and its supporters continue to organize demonstrations against Israel as part of a march towards their homelands from where they were displaced by Israeli forces decades ago. In return, Israel does not hesitate to kill more innocent and unarmed protesters despite the calls from the international arena and the efforts for the peace. Moreover, Hamas and Al-Fatah, which are at odds on several issues but were close to a deal of reconciliation and reunification, accuse each other of igniting the recent incidents.

According to an August-dated deal between Hamas and Israel several steps were to be taken for the sake of peace and stability. The first phase of deal was put into effect in the middle of August, enabling the reconstruction of the Gaza Strip under Qatari sponsorship and a prisoner swap, which has been one of the most sensitive issues for Israel. The deal included that there would be a comprehensive cease-fire and hence Israel will stop the aerial and border attacks while Hamas will not send burning kites or fire missiles that are generally made of any material available. Secondly, Gaza's border would be reopened as Gaza residents are trapped in the tiny land.

Fishing zones for Gaza's fishermen would be expanded. Israeli forces shoot fishermen in case they go farther than three miles. Fishing is one of the main means of living. Medical and humanitarian assistance would be provided. Currently, Gaza residents suffer from lack of medical equipment and services. For instance, cancer patients cannot be treated, as there are no resources available. The issue of captive soldiers and missing civilians would be resolved. Most importantly for the future, a seaport and an airport may be built in Gaza. The deal sounded exciting as the two parties had never been closer to de-escalation.

In addition to this, the reconciliation process between Hamas and Al-Fatah was on its way. According to this internal deal, Hamas was going to hand over Gaza's control in consequence of which Al-Fatah was going to halt the embargoes like the electricity cuts or to continue paying the officials' salaries.

Hamas seems to be upset with Israel's reckless attacks on Gaza border over the weekend, killing 7, two of which were boys, aged 12 and 14. Israel's daily Haaretz reported that Hamas officials stated their disappointment to the Egyptian intelligence and accused Israel of "intentionally targeting a large number of young men who approached the fence in order to force it and other factions operating in Gaza to respond and drag the Strip into another round of fighting." Moreover, it has been reported that Hamas officials were discussing how to respond these attacks. It is very accustomed that in case of Hamas' response to any attack, Israel comes up with a more fierce attack. Therefore, it is not out of option that the relative current de-escalation may be harmed.

A Hamas official, Mahmoud al-Zahar who was in Cairo as part of the Hamas delegation, accused the Palestinian Authority leader Mahmoud Abbas of pushing Israel into a new war with Hamas. Underlining that the protests and the "march of return" will not be ended, he claimed that Abbas was ambitious to "control everything in Gaza" and war was "good for him."

Despite the claims in Lebanese media that Norway was mediating the talks between Israel and Hamas, particularly on the return of dead Israeli soldiers' bodies, these reports were disclaimed by the two parties. The quick refutation may be seen as a sign of the increasing tensions.