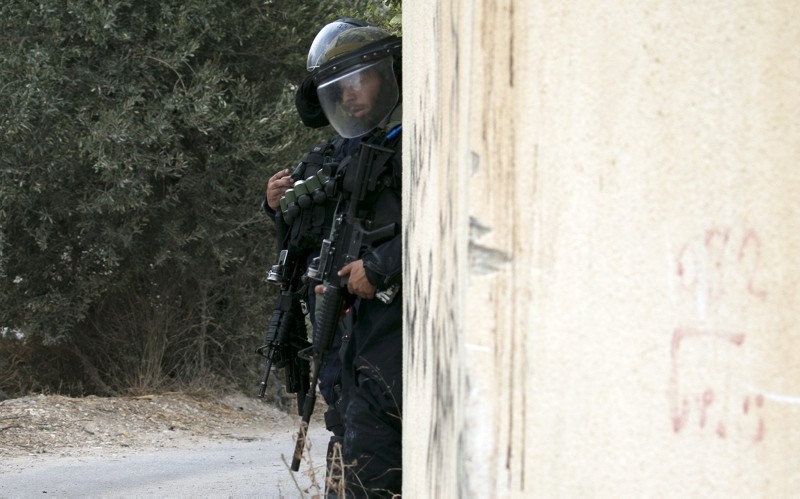 Israeli forces stand guard in the village of Shuwaykah where the man who shot dead two Israelis earlier used to live, in the occupied west bank, on October 7, 2018. (AFP Photo)
by French Press Agency - AFP
Oct 08, 2018 12:00 am

Israeli forces raided a Palestinian village to find suspect behind the shooting of two Israelis in an industrial zone in West Bank, making many arrests while suspect remained at large.

Ashraf Naalwa, 23, from the northern West Bank village of Shuweika, has been named by the Israeli army as the Palestinian behind Sunday's attack in the occupied West Bank industrial area of Barkan where two Israelis were killed and a third wounded.

Soldiers, as well as police and Shin Bet internal security officers "operated in the village of Shuweika, north of Tulkarm," where the suspect lives, the military said.

It said security forces "arrested" an unspecified number of people "suspected of aiding the terrorist" while a manhunt for the gunman was still underway.

A spokesman for the Shin Bet said they had arrested Naalwa's brother, while his sister was "detained, questioned and released," declining to provide further details.

Naalwa was employed at the same plant in the northern West Bank site as his two victims -- Kim Levengrond Yehezkel, 28, and Ziv Hagbi, 34.

The industrial zone is located next to the Israeli settlement Barkan and near the settlement of Ariel in the north of the West Bank.

Palestinians work side by side with Israelis in the industrial zone.

A third woman also shot in the attack was hospitalized in stable condition.

Levengrond Yehezkel, who was buried late Sunday, had been bound to a chair by Naalwa with cable ties before being shot, according to her father.

Naalwa used a homemade gun, known locally as a "Carlo," according to the army, in what security forces believe was a "lone-wolf attack," meaning he was not part of a militant organization or acting on its behalf.