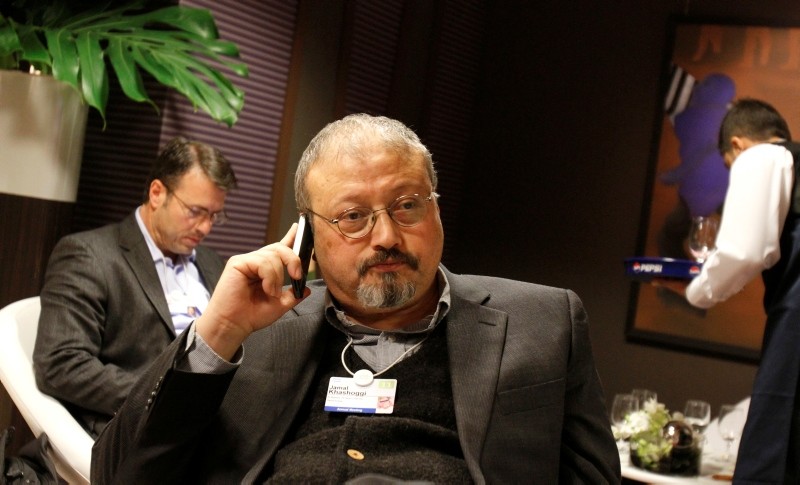 In this Jan. 29, 2011, file photo, Saudi Arabian journalist Jamal Khashoggi speaks on his cellphone at the World Economic Forum in Davos, Switzerland. (AP Photo)
by daily sabah Oct 09, 2018 12:00 am

Prominent critic of Saudi Arabia and its leadership, Washington Post contributor Jamal Khashoggi disappeared at the Saudi consulate in Istanbul last Tuesday and is now presumed dead by several Turkish officials who are rigorously investigating the matter.

An advocate for free speech in the kingdom, the 58-year-old journalist had been living in a self-exile to avoid a possible arrest in light of the slew of imprisonments among his compatriots.

He has been missing since the afternoon of Oct. 2, after he entered the Saudi consulate in Istanbul to get several documents for marriage procedures. An investigation by Turkish prosecutors is ongoing and Turkish authorities including President Recep Tayyip Erdoğan are closely investigating the matter.

Since becoming the new power behind the throne in 2017, Crown Prince Mohammed bin Salman is set on modernizing the kingdom, leaving little room for criticism. Over the years, he has given women the right to drive but jailed the women activists whom called for the reform. He has also imprisoned intellectuals and businessmen as a warning to those who attempt to oppose the kingdom.

Under Saudi Arabian law, detaining individuals for a wide array of "crimes" is made easy with regulations that provide ample room for prosecution, according to the Electronic Frontier Foundation (EFF), an NGO working in digital privacy, free speech, and innovation issues.

The EFF explains that according to the Saudi cybercrime and counter-terrorism legislation, some terrorism provisions criminalize the following:

"Anyone who strips away their loyalty to the country's rulers, or who swears allegiance to any party, organization, ideology, group or individual inside or outside (the kingdom)." (Article 2)

"Attending conferences, seminars or meetings inside or outside (the kingdom) that target the security of society or sow discord in society." (Article 9)

"Inciting or making countries, committees or international organizations antagonistic to the kingdom." (Article 11)

The provisions have led to the persecution of many activists, social media personalities and writers who call for reforms, criticize leadership, voice opinions, desire more freedom in the system or attempt to topple the monarchy.

Khashoggi's case is the first major incident among Saudi dissidents living abroad since the crown prince started running the show in Riyadh. But Khashoggi is hardly the first dissident to have disappeared after voicing his criticisms of Saudi leadership.

In 2003, Prince Sultan bin Turki, an outspoken critic who left the country a year earlier to live in Switzerland, was kidnapped by Saudi's henchmen and sentenced to seven years in prison, according to British daily The Independent.

Known to be an outspoken critic of Saudi leadership, Turki was invited to breakfast in Geneva by a son of the then-ruling Saudi King Fahd to resolve some of their issues before being dragged onto a plane back to Riyadh.

In 2010, Turki filed a complaint for abduction in a Swiss court, where he was given permission to fly to Boston for a medical procedure. However, the case was hardly looked into by authorities.

Turki taken onto a Riyadh-bound plane by armed guards again in 2016 in Paris, where he supposedly promised to visit his father in Cairo. He has been stuck in Saudi Arabia ever since.

Another key member of the royal family who was in charge of its security, Turki bin Bandar, was jailed after falling out of favor with the royals after a tug-of-war battle over his inheritance.

Following his release in 2012, Bandar moved to Paris where he started a YouTube channel calling for reforms in the kingdom. He disappeared in 2015 while on a business trip in Morocco. The Guardian quoted an opposition member who accused the Moroccan government of handing him to the Saudis.

Khashoggi's case has sparked international backlash and many Saudi dissidents living abroad have no doubt that the kingdom had a part to play in his "disappearance."

London-based dissident and satirist Ghanem al-Dosary said that the incident is a "message, very clear, that our hands can reach you wherever you are," according to his comments carried by The New York Times.

A Saudi dissident in Canada, Omar Abdulaziz, told the Times: "They don't care if you are famous, if you have a big following or not. If you criticize us even a little bit, we are going to go after you.'"

Abdulaziz's university scholarship was canceled after he voiced concerns on social media regarding the kingdom's leadership. He was instructed to return to the homeland to resolve the issue, but applied for asylum in Canada instead.

Research by a laboratory at the University of Toronto, Citizen Lab, indicated that hackers working for the kingdom had "targeted and infected" his cellphone, accessing his "contacts, private family photos, text messages and live calls from popular mobile messaging apps."

"Yes, I was criticizing the... We were looking or freedom of speech, we were looking for human rights. But reaching out to the families of dissidents, hacking their phones, kidnapping journalists — this is crazy," Abdulaziz said.