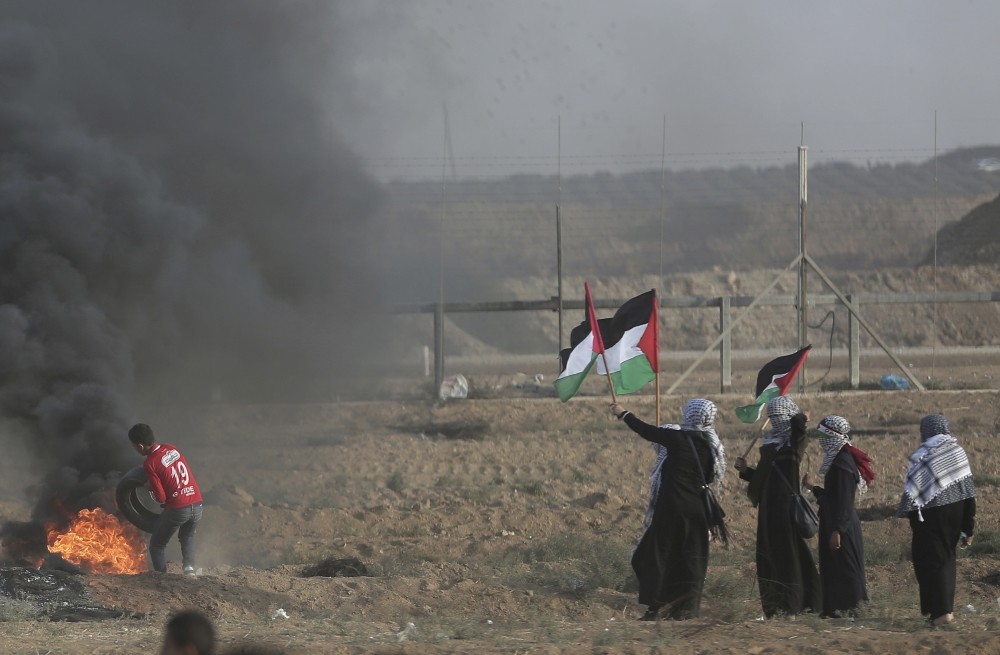 Palestinian women wave national flags during a protest at Gaza Strip's border with Israel, Oct. 5.
by Compiled from Wire Services
Oct 10, 2018 12:00 am

Fifty-one Palestinian women, including nine injured females, are being kept in prison and have been subjected to suffering and torture, according to the report released by a human rights group

Taken away from their children, dozens of Palestinian women are suffering abuse in Israeli prisons, according to Palestinian activists. In a recent report, Addameer Prisoner Support and Human Rights Association said Israeli authorities are holding 51 women, including nine injured women and two minors.

According to the report, Israel has detained 516 women since 2015, of whom 90 women have been arrested since the beginning of this year. Israel have arrested 10,000 Palestinian women since the 1967 Middle East war, the report also noted.

Last month, Palestinian female journalist Lama Khater was arrested in an Israeli raid on her home in the West Bank city of Hebron. "Dozens of Israeli soldiers surrounded and raided our house before arresting her in front of our children," her husband Hazem Fakhori told Anadolu Agency (AA). Fakhori accused Israeli soldiers of abusing his wife, citing that soldiers have kept shouting at her during the detention. "She was transferred several times to a doctor, who only gave her some painkillers before sending her back for interrogation," he said.

Another painful story is the case of Israa Jaabis, a Palestinian woman who was disfigured by an Israeli attack on her car and left to suffer in Israel's Hasharon prison. "Jaabis urgently needs to undergo cosmetic surgeries on her hands, face, ears, and teeth," Ra'afat Hamdoneh, head of the Palestinian Prisoners Center for Studies, said.

Jaabis was detained by Israeli forces in October 2015 when her car exploded as a result of the explosion of a cooking gas cylinder she was transporting, leaving her with severe burns. Israel authorities accused her of purposefully attempting to blow up her car and sentenced her to 11 years in jail on charges of attempted murder.

The Israeli army frequently carries out wide-ranging arrest campaigns across the occupied West Bank on the pretext of searching for "wanted" Palestinians. According to Palestinian figures, some 6,500 Palestinians continue to languish in Israeli detention facilities, including scores of women and hundreds of minors. Israeli treatment of Palestinian children in military detention has become a major area of concern for the international community. International human rights groups have heavily criticized Israel's handling of Palestinian teen hero Ahed Tamimi, placing under scrutiny the Israeli military court system that Palestinian youth face in the West Bank. The Israeli army has killed 25 Palestinian children in the occupied West Bank and the blockaded Gaza Strip since the beginning of 2018, a human rights nongovernmental organization said in July. In a press release, Defense for Children International-Palestine, which advocates for the rights of Palestinian children in the Israeli-occupied Palestinian territories, went on to assert that Israeli forces had deliberately killed minors with live ammunition.