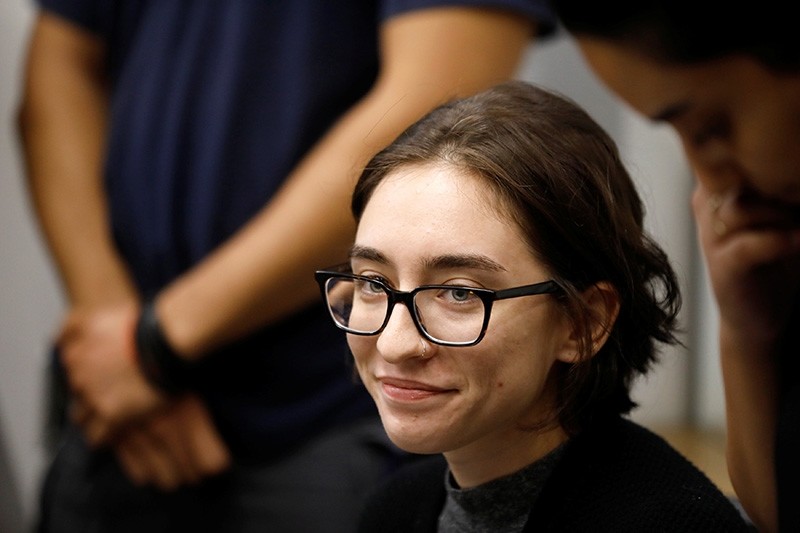 An American graduate student who has been held in detention while fighting an expulsion order over her involvement in the boycott movement against Israel appeared in court on Thursday, asking a judge to allow her to enter the country to begin her studies.

It was the first time that Lara Alqasem has appeared in public since she was stopped at Israel's Ben Gurion Airport on Oct. 2.

Alqasem, 22, appeared calm during the hearing, her hands folded on her knees. She kept quiet and stared straight ahead, at first struggling to suppress a giddy smile when swarmed by reporters and photographers.

She is to remain in detention until the court delivers its written verdict in the coming days. The judge gave no indication which way he would lean or when he would make his decision.

"I think we have a good case. The state's argument and evidence was weak, but I've learned not to be optimistic," her lawyer Yotam Ben-Hillel said, referring to a court's rejection of Alqasem's first appeal.

The 22-year-old American, whose father is Palestinian, arrived in Israel with a valid student visa and was registered to study human rights at Jerusalem's Hebrew University.

But she was barred from entering the country and ordered deported, based on suspicions that she's an activist in the boycott movement.

Israel has said that she is not being held against her will and is free to leave the country. It also has said it would reconsider its decision if she apologizes and renounces the boycott movement.

Israel enacted a law last year banning entry for any foreigner who "knowingly issues a public call for boycotting Israel." It has come under heavy criticism for its handling of Alqasem's case.

Alqasem, from Southwest Ranches, Florida, is a former president of the University of Florida chapter of Students for Justice in Palestine. The group is a branch of the BDS movement, whose name comes from its calls for boycotts, divestment and sanctions against Israel.

BDS supporters say that in urging businesses, artists and universities to sever ties with Israel, they are using nonviolent means to resist unjust policies toward Palestinians. Israel says the movement masks its motives to delegitimize or destroy the Jewish state.

Asher Fredman, a senior official in the Strategic Affairs Ministry, which oversees Israel's anti-BDS efforts, said that Alqasem was being denied entry because of her past activities, not her opinions.

"We have clear criteria," he said. "We believe that Miss Alqasem meets those criteria based on her actions, and the actions of the organization of which she was a senior leader over several years."

Alqasem's lawyers say that she is no longer engaged in BDS activity, and has promised not to promote it in the future. They claim her involvement in what they say is a small and insignificant chapter of Students for Justice in Palestine does not warrant Israel's deportation order.

Ben-Hillel told the court that his client had come to Israel to learn Hebrew and study the Holocaust and other issues.

Former professors have described her as a curious and open-minded student. Jewish groups in the United States as well as the Hebrew University, where she is registered to pursue a master's degree in human rights, have also flocked to her defense.

A Hebrew University lawyer and two opposition lawmakers testified in her defense, saying the government's tough stance was wrong and hurting the country's image abroad.

The United States said Wednesday it supports freedom of expression and that its embassy in Jerusalem was offering Alqasem consular assistance.

"As a general principle, we value freedom of expression even in cases where we don't agree with the political views expressed and this is such a case," State Department spokesman Robert Palladino told reporters.

"Our strong opposition to the boycotts and sanctions of the state of Israel is well-known."

But he added: "Israel is a sovereign nation that can determine who enters."

There have been several high-profile cases involving the law barring boycott supporters as well as the questioning of foreigners seeking to enter.

In May, an Israeli court suspended an expulsion order for Human Rights Watch's country director, Omar Shakir, whom authorities ordered to leave after accusing him of having previously supported a boycott. That case is still ongoing.

Peter Beinart, a prominent Jewish American journalist, said he faced extensive and pointed questioning when seeking to enter Israel for a private visit in August.

A supporter of a boycott of goods from Israeli settlements in the occupied West Bank, Beinart said he was asked repeatedly for names of organizations with which he is associated.

"Israel is an open society which welcomes all -- critics and supporters alike," Netanyahu said.