Journalist Khashoggi's disappearance may send US-Saudi relations into a tailspin 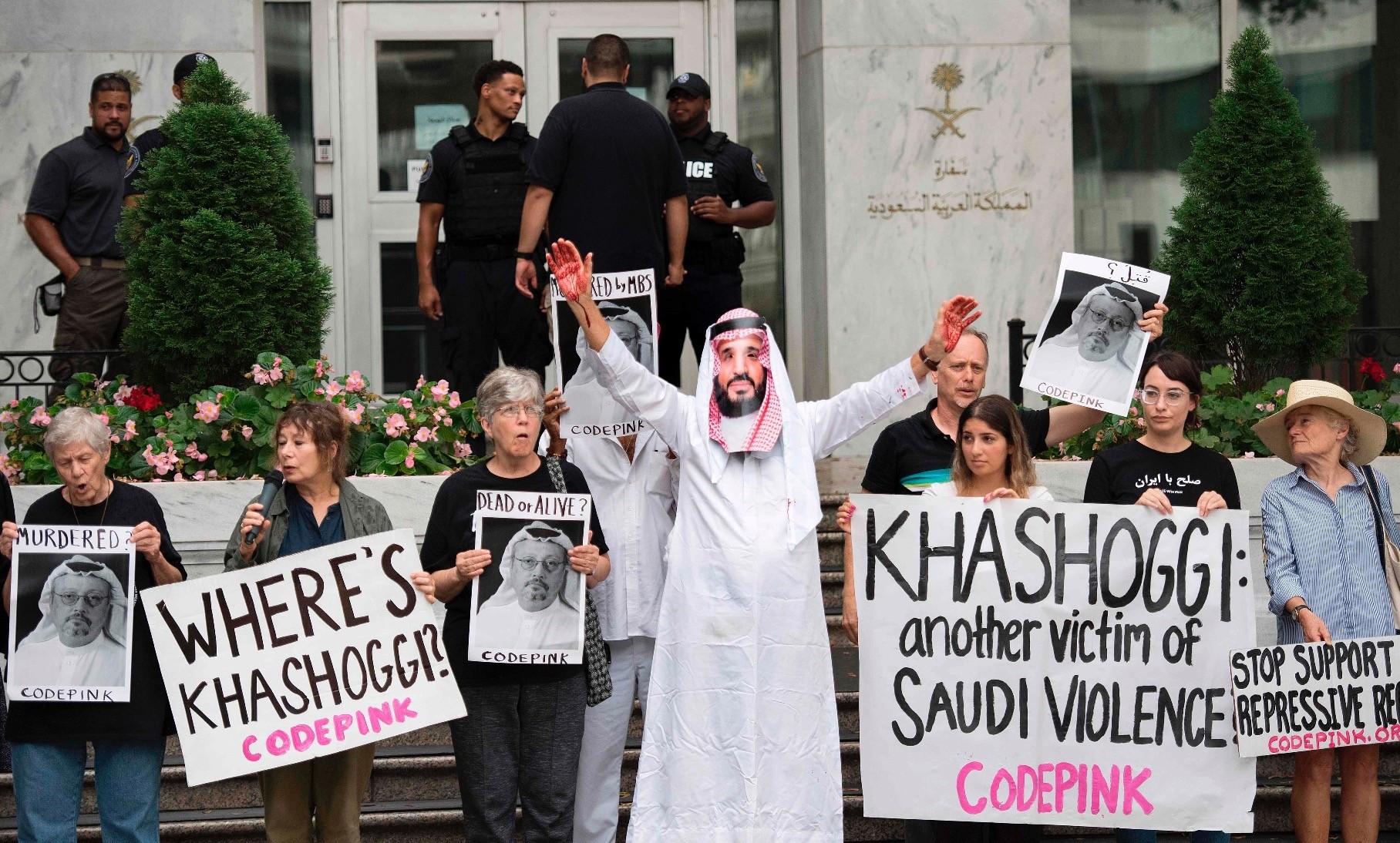 People, including a demonstrator dressed as Crown Prince Mohammed bin Salman with blood on his hands, protest outside the Saudi Embassy in Washington, DC, Oct. 8, demanding justice for Jamal Khashoggi.
by Mustafa Kırıkçıoğlu Oct 12, 2018 12:00 am

The suspected assassination of journalist Jamal Khashoggi in the Saudi consulate in Istanbul may cause the Trump administration to bow to public pressure and turn against Riyadh. It may also affect the relationship between U.S. President Trump and Crown Prince Mohammed bin Salman, say experts

It was a year ago that Donald Trump joined in a traditional sword jig in Saudi Arabia where he was swaying and smirking with pleasure on the defense deal with Riyadh, pledging $110 billion immediately and an estimated $300 billion over 10 years. Trump got what he was seeking and the Saudi officials were happy with the development of bilateral relations with its traditional ally. The nuclear deal with Iran initiated by the Obama administration had caused U.S.-Saudi ties to hit rock bottom as this deal would later be labelled as "the worst deal ever" by Trump; something many in Riyadh agree with. Despite the U.S. president's insulting statements over U.S. protection of the kingdom and sheer attempts of capitalizing the Saudi government, relations had gained momentum during Trump's tenure due to common interests, particularly on Iran, as once stated by the Saudis that "the two countries share the same views on the gravity of the Iranian expansionist moves in the region."

Now however, the suspected murder of 59-year-old Saudi dissident Jamal Khashoggi, a Washington Post contributor, in the Saudi consulate in Istanbul, could turn the tide in relations and will possibly affect Trump's relations with Saudi Crown Prince Mohammed Bin Salman (widely referred to simply as MBS). Ali Bakeer, an expert on Middle Eastern affairs, told Daily Sabah that if the Saudis are responsible for killing or kidnapping Khashoggi, and the available evidence until now points to them, then this "barbaric" act should be met with a strong response not only from Turkey but also from the international community and the U.S. in particular.

"Because many believe that it is Trump's kind of special relation with Crown Prince Mohammed Bin Salman which emboldens the latter to execute reckless, irresponsible and dangerous policies inside Saudi Arabia and outside of it," he said.

Khashoggi has been missing since last Tuesday after entering the Saudi consulate to gather documents for marriage. His fiancee and friends have said he did not leave the building. He was reportedly killed by an assassination squad, which included a forensic expert that arrived in two private jets shortly before their victim's appointment at the consulate and left Turkey later the same day. So far, footage released shows Khashoggi entering the consulate building, however, no footage has been released showing his exit from the consulate.

Twenty-two Republican and Democrat senators sent a letter on Wednesday to the Trump administration to investigate the Khashoggi case by invoking the Global Magnitsky Act of 2016. It would mean triggering a human rights probe that could result in sanctions in 120 days against Saudi officials and entities. Senators Bob Corker, Chairman of the Senate Foreign Relations Committee and Lindsey Graham, the Appropriations Subcommittee on State, Foreign Operations and Related Programs, were among those who signed the letter.

Graham also told reporters on Wednesday that "there would be hell to pay" if the missing journalist was murdered by the Saudi government, adding that the murder would "cross every line of normality in the international community."

Many renowned U.S. intellectuals also called on the Trump administration to pressure the Saudi government to shed light on the Khashoggi case.

One of them was the New York Times columnist and Pulitzer Prize winning author Thomas L. Friedman. "President Trump must ask the Saudis to give a full and credible account of what happened to Jamal Khashoggi inside their Istanbul consulate. And tell us what he knows too," he tweeted last week.

Speaking on the possible effects of the Khashoggi case on Saudi-U.S. relations, Jordanian journalist Ehssan Alfakeeh told Daily Sabah that despite U.S.-Saudi relations being historically strong and solid, drafts such as preventing the sale of U.S. arms to the Saudis by Congress could cause an escalation and eventually lead to international sanctions or isolation led by Washington.

"It is known that the journalist Jamal Khashoggi​ holds an 'A' permit and a special visa for those who have exceptional privileges to enter the United States and work in its institutions and territories, which makes it a humanitarian and moral responsibility for the government of President Donald Trump to follow up the matter and investigate the facts," she said.

Alfakeeh added that the U.S. government will use the incident to further economic benefits and blackmail Saudi Arabia.

Trump's volatile diplomacy has also affected ties with Saudi Arabia. He had hailed his personal friendship with MBS during the crown prince's 20-day visit to Washington in May, making a long presentation to reporters on the Saudi military purchases from the U.S. valued at more than $12.5 billion. But Trump has often talked down to Saudi officials by asserting that the U.S. is "protecting" them, therefore they need to pay more money in exchange for this protection.

"We protect Saudi Arabia. Would you say they're rich. And I love the King, King Salman. But I said 'King — we're protecting you — you might not be there for two weeks without us — you have to pay for your military,'" Trump said earlier in October to cheers at a rally in Mississippi.

Despite this Riyadh's responses remained weak against Trump's insults. MBS said his country will not pay Washington for its own security, saying his oil-rich kingdom was created before the U.S. itself.

"Khashoggi had good relations with American decision-making circles, so his death in this way leads to tension between U.S.-Saudi relations, which is naturally tense as a result of Trump's extortion of the Saudi leadership and the demand to pay more money on the pretext of protecting it, which upset the Saudi leadership," said Abdulhamid Qutb, an Egyptian journalist working for the Qatari Al-Sharq newspaper.

Did the U.S. know about the assassination?

The Washington Post reported on Tuesday that U.S. intelligence services were aware of Saudi Arabia's plans to capture Khashoggi.

Citing a person familiar with the case, the report said U.S. intelligence intercepted the communications of Saudi officials elaborating on a plan to seize Khashoggi.

Bakeer said that if it turned out that the U.S. intelligence knew about the Saudi plan of assassinating Khashoggi and they didn't warn him at least or warn the Turkish authorities or even take an action to prevent such an operation, "then this would tell much about how harmful the relation between MBS and Trump is becoming to the U.S. institutions."

A blow to the 'reformist' image of the crown prince

The suspected killing of Khashoggi is also expected to deal a heavy blow to Mohammed bin Salman's image, who has spent a lot of money to portray himself as a moderate reformist. His image has already suffered due to Saudi military intervention in neighboring Yemen that began in 2015, which has claimed the lives of thousands of people and eventually turning into a humanitarian crisis.

Alfakeeh said that the current Saudi government has a negative record of arresting large numbers of scientists, students, intellectuals, academics, businessmen, economic experts and civil rights activists. "About motivations, each case is different from the other, but generally it is the demand for a series of internal or external reforms in state public policy, the lack of absolute acceptance of official policies with demands for greater freedom and participation in decision-making," she said, regarding the arrests.