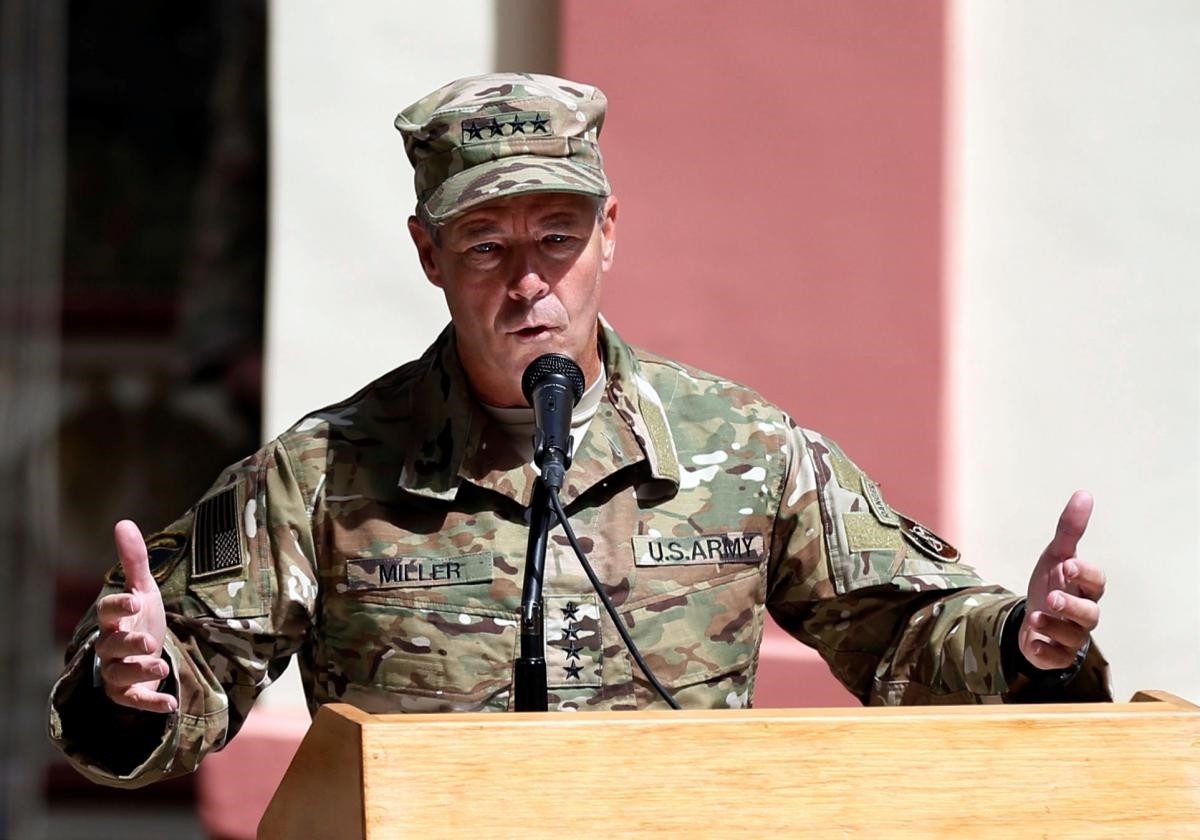 A powerful Afghan police chief and a journalist were among at least three people killed on Thursday when a gunman opened fire on a high-level security meeting attended by top U.S. commander General Scott Miller, officials said.

At least 12 people were wounded, including three Americans and a provincial governor, in the Taliban-claimed attack that comes two days before Afghanistan's long-delayed parliamentary elections. Miller, who had been attending a meeting with security officials ahead of parliamentary elections on Saturday, was not hurt but police chief General Abdul Razeq was killed.

A senior security official said the governor's bodyguard opened fire and hit Razeq in the back as soon as officials came out of the meeting. The governor and the local head of the NDS intelligence service were wounded.

Three Americans, including a soldier, civilian and contractor, were wounded in the crossfire and had been evacuated, NATO spokesman Colonel Knut Peters said.

The Taliban said Miller and General Abdul Raziq -- the police chief of Kandahar province who had a fierce reputation for brutality -- were the targets of the shooting.

"General Raziq and the provincial NDS (intelligence agency) chief have been killed, and the governor himself is in a critical condition," a senior government official told AFP on the condition of anonymity.

Six of Raziq's bodyguards and two intelligence officers also were wounded in the attack that was carried out by one of the governor's security personnel, the official said.

"Provincial officials including the governor, the police chief and other officials were accompanying the foreign guests to the plane when the gunshots happened," said Said Jan Khakrezwal, the head of the provincial council.

The shooter had been killed, he added.

Security forces swarmed the southern city of Kandahar after the shooting that shuttered shops and sent terrified civilians -- already on high alert for attacks -- into their homes.

A hospital official told AFP that several senior officials had been brought to the medical facility, but they would not provide further details.

Another witness said the city was "full of military forces."

"They don't allow anyone to come out of their houses," he told AFP.

Raziq, an anti-Taliban strongman, was widely seen as a bulwark against the insurgency in Kandahar, the militant group's birthplace, and had previously survived multiple assassination attempts.

He long controlled the province with an iron hand and was accused of running secret torture chambers, an allegation he denied.

Afghanistan is tense ahead of the Oct. 20 legislative election after the Taliban pledged to attack the ballot.

More than 2,500 candidates are competing for 249 seats in the lower house, including doctors, mullahs, and the sons of former warlords.

The election process has already been marred by bloody violence, with hundreds killed or wounded in recent months.

At least 10 candidates have been killed so far, including Abdul Jabar Qahraman who was blown up Wednesday by a bomb placed under his sofa in the southern province of Helmand.

The election is seen as a rehearsal for the presidential vote scheduled for April and an important milestone ahead of a U.N. meeting in Geneva in November where Afghanistan is under pressure to show progress on "democratic processes."