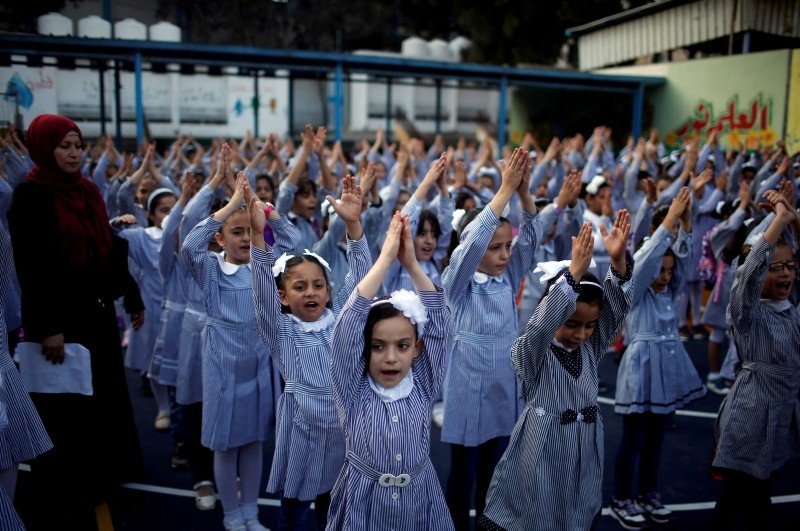 Palestinian schoolgirls participate in the morning exercise at an UNRWA-run school, on the first day of a new school year, in Gaza City August 29, 2018. (Reuters File Photo)
by Anadolu Agency
Oct 18, 2018 12:00 am

Turkey's non-governmental Humanitarian Relief Foundation (IHH) on Thursday supplied the blockaded Gaza Strip with school supplies and equipment for some 2,000 children, according to an IHH official in Gaza.

"We have provided school equipment for 2,000 orphans and poor children in Gaza at a total cost of 60,000 euros," Mahmoud al-Shurafa, a spokesman for the IHH's office in Gaza, told Anadolu Agency.

The project, is intended to ease the difficult economic circumstances faced by orphans and poor children in the besieged coastal territory, al-Shurafa said.

"We are continuing to provide humanitarian aid to Gaza residents forced to live under the Israeli blockade," he added.

According to reports, some 80 percent of the people in Gaza rely on international aid to survive, while 40 percent live under the poverty line.

The following year, Israel ratcheted up its blockade after Hamas seized the entire strip -- which it still governs today -- from rival Palestinian faction Fatah.

Still in effect, the blockade has crippled Gaza's economy and deprived the strip's more than two million inhabitants of many basic commodities.