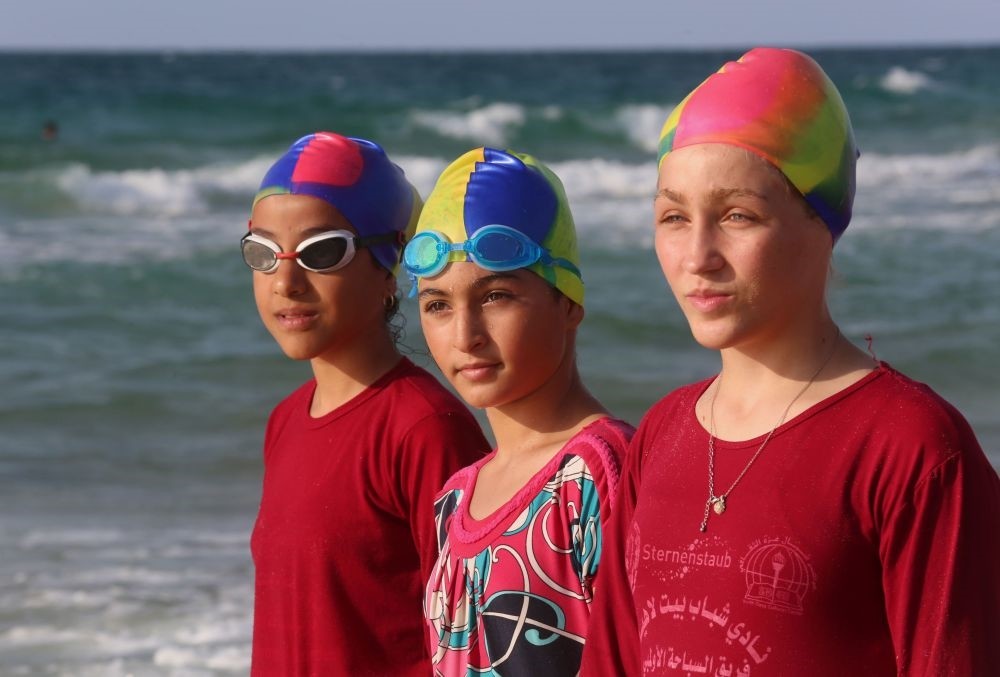 Young Palestinian members of a swimming club prepare to swim during a training session in Beit Lahia in the northern Gaza Strip, Oct. 4.
by Daily Sabah with AFP Oct 23, 2018 12:00 am

Under the Israeli blockade, young Palestinians brave one of the world's most polluted seas off the Gaza Strip to pursue their Olympic dreams

On one of the world's most polluted coastlines, 30 young Palestinians dive head first into the sea off the Gaza Strip, their minds filled with dreams of Olympic glory. Aged between 11 and 16, they make up a rare swimming club in the besieged enclave where the humanitarian crisis has worsened each day.

The team can only train near Beit Lahia in northern Gaza, which has the lowest rates of pollution. The desperate shortage of energy and lack of sanitation infrastructure mean around 100 million liters of poorly treated sewage are pumped into the sea every day, according to the United Nations. In the worst spots along the shore the sea is tinted brown. More than 95 percent of tap water is polluted, and water-related diseases are the primary cause of child mortality in Gaza, according to the World Health Organization (WHO). The Mediterranean hugs the entire 40 kilometers (25 mile) western border of the Gaza Strip, but almost no one enters its waters. However, due to lack of free public swimming pools and difficult training conditions, the team has no choice but brave the sea off the Gaza Strip a few times a week, helping to fuel their dreams.

"We lack even the simplest equipment such as goggles and swimsuits," coach Amjad Tantish said, as reported by Agence France-Presse (AFP). "We don't have any funding."

Israel has seized dozens of diving suits and other swimming aids it says the Hamas resistance group was seeking to smuggle into Gaza for military purposes. Already squeezed by the more than decade-long Israeli blockade, Gaza's economy has been further weakened by U.S. aid cuts and financial measures. Since 2007, the Gaza Strip has suffered under a crippling Israeli and Egyptian blockade that has gutted its economy and deprived its inhabitants of many vital commodities, including food, fuel and medicine.

Another significant problem for the team is to get a visa to leave Gaza via Israel which has seen as insurmountable hurdle. "We have many opportunities to participate in outdoor training camps and in Arab competitions, but travel is a major obstacle," coach Tantish said. The Palestine Olympic Committee sent only six athletes to the 2016 Games. Four of those, including the two swimmers, were invited to attend despite not meeting the minimum requirements. But even they had regular access to pools and neither was based in Gaza.

Last month, the World Bank warned that the Gaza economy was in "free fall," calling on Israel and the international community to take immediate actions to avoid "immediate collapse" in the Palestinian territory. According to the bank, unemployment is now over 50 percent and over 70 percent among Gaza's youth. The poverty rate in the Gaza Strip has reached 80 percent amid more than a decade-long Israeli blockade, according to the Palestinian General Federation of Trade Unions. Dozens of Palestinians have long demonstrated against high unemployment rates in the Gaza Strip, which has been reeling under a crippling Israeli blockade.