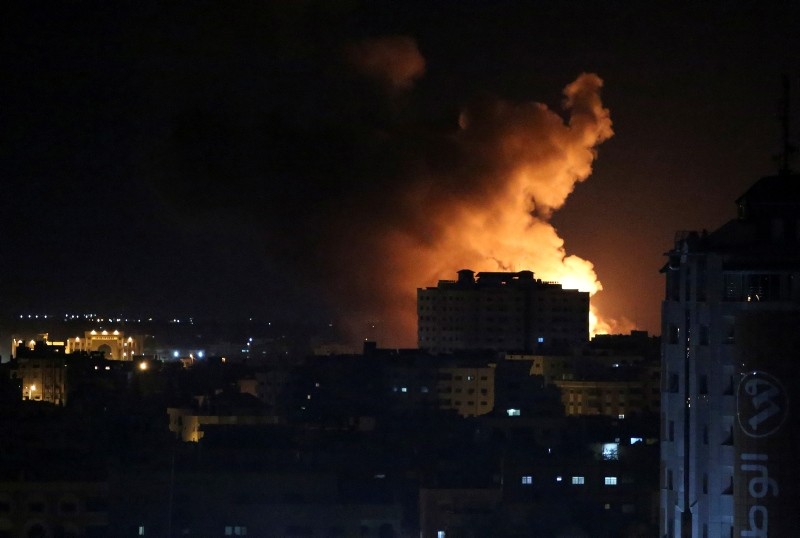 Israeli forces hit more than 80 targets of the Hamas group in the Gaza Strip Saturday after a barrage of rockets from Gaza hit Israel overnight.

Another rocket was fired from the Palestinian territory on Saturday morning, setting off sirens in nearby Israeli communities, before being shot down by Israel's Iron Dome air defense system.

The rocket fire began late Friday, just hours after five Palestinians were killed during renewed clashes on the Gaza-Israeli border.

The biggest rocket attacks in months came despite talk of progress towards an Egyptian-brokered deal to end months of often violent protests along the border in return for an easing of Israel's crippling 11-year blockade.

"Overnight, dozens of rockets were launched from the Gaza Strip at communities in southern Israel," the army said, putting the exact number in a separate announcement at 30.

It said the Iron Dome intercepted approximately 10 of them, while two rockets came down inside the Gaza Strip and the others hit "open areas".

Israeli medics said seven civilians were being treated for shock.

In response to the rockets, Israeli fighter jets, helicopters and drones struck "approximately 80 Hamas targets throughout the Gaza Strip".

The Israeli military has accused Syria and Iran of responsibility for the attacks out of the Gaza Strip and has threatened to strike Iranian targets in Syria in response.

The Palestinian Islamic Jihad (PIJ) said Saturday that it will stop firing rockets at Israel after an Egyptian-brokered ceasefire.

The announcement came after the PIJ took credit for launching over 30 rockets at Israel on Friday and Saturday, with Israel retaliating with a large-scale assault on 80 Hamas military targets in Gaza.

The group said in a statement that its decision to halt the rockets was in response to Egyptian efforts to restore calm in Gaza and prevent a further deterioration between Israel and Gaza.

Around the same time that the PIJ announced the ceasefire, Israel said it struck eight PIJ targets in the coastal enclave.

There were no reports of casualties in Gaza as a result of the strikes.

In Gaza City, a four-story building was completely destroyed in a strike, AFP correspondents on the scene said.

The Israeli army said it was a major headquarters for Gaza's rulers Hamas.

Hamas did not claim responsibility for the rockets, but Israel holds it responsible for any fire from the coastal enclave.

The "resistance is considering expanding the response in number and type, if the enemy continues its aggression against our people," it said.

A Hamas official said late Friday Egypt was again seeking to negotiate a return to calm.

Israel and Hamas have fought three wars since 2008, and Egypt and the United Nations have been leading diplomatic efforts to avert a fourth.

"More rockets from Gaza into Israel. Another night where parents are ushering terrified children to cover. Violence will not build futures for anyone," he said on Twitter.

On Friday, four Palestinians aged between 22 and 27 were shot dead by Israeli fire in separate incidents along the border fence, the Gaza health ministry said.

A fifth died when a hand grenade he was holding exploded accidentally, witnesses said.

Palestinians have gathered for protests along the border at least weekly since March 30.

The army did not comment on the deaths but said around 16,000 "rioters and demonstrators" had gathered, with some setting tires alight and hurling rocks, firebombs and grenades towards soldiers.

At least 212 Palestinians have been killed by Israeli fire in Gaza since the protests began, according to figures collated by AFP.

The majority have died during protests, while smaller numbers have been killed by air strikes or tank fire.

One Israeli soldier was shot dead by a Palestinian sniper over the same period.

The protesters are calling to be allowed to return to lands their families fled or were expelled from in the 1948 war that accompanied Israel's creation.

They are also protesting over Israel's crippling blockade of Gaza.

The fresh violence could also scupper hopes of a deal to end the months of increasing tensions.

Last week, a rocket fired from Gaza hit an Israeli home, narrowly avoiding killing a family. In response the Israeli army carried out air strikes on around 20 Hamas targets in Gaza.

The London-based Arabic newspaper Al-Hayat reported Friday that a deal had been reached that would see the protests end in exchange for an easing of Israel's blockade.

Hamas officials denied a deal had been struck but confirmed to AFP that progress was being made.

Israel also fully reopened its border crossings with the Gaza Strip this week following a week of relative calm.

It allowed dozens of trucks of fuel paid for by Qatar into the territory, having previously blocked their entry in response to the border violence.

Israel says its 11-year blockade is necessary to isolate Hamas, while critics say it amounts to collective punishment of Gaza's two million residents.