Iranians protest US economic sanctions on anniversary of embassy takeover 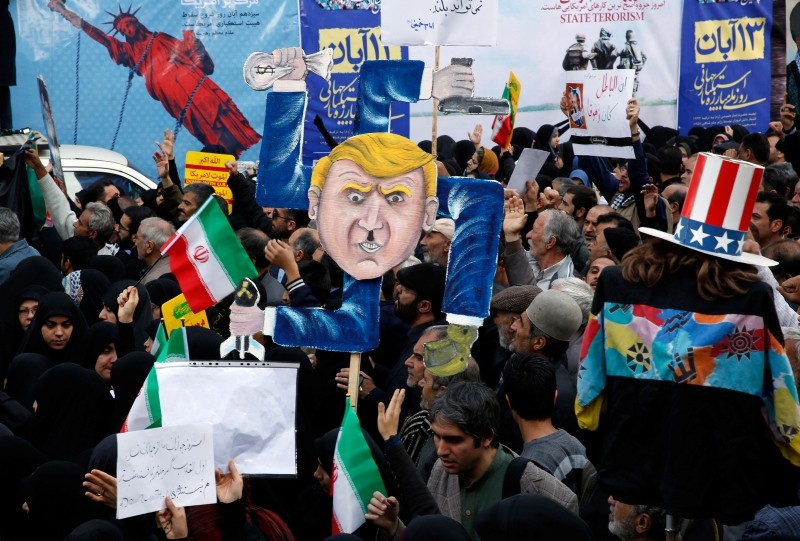 Iranians hold a placard showing a caricature of U.S. President Donald J. Trump during an anti-U.S. demonstration marking the 39th anniversary of U.S. Embassy takeover, in front of the former U.S. embassy in Tehran, Iran, Nov. 04 2018. (EPA Photo)
by Compiled from Wire Services Nov 04, 2018 12:00 am

Rancor between the U.S. and Iran is especially strong this time around, as thousands rallied to mark both the anniversary of the U.S. embassy takeover and the reimposition of U.S. sanctions

Tens of thousands of Iranians took to the streets for state-organized demonstrations as U.S. sanctions on Iran were set to take effect again on Monday.

Sunday's rallies took place on the anniversary of the 1979 takeover of the U.S. embassy in Tehran by radical Iranian students.

Thousands of students in the government-organized rally in the capital Tehran, broadcast live by state television, burned the Stars and Stripes, an effigy of Uncle Sam and pictures of President Donald Trump outside the leafy downtown compound that once housed the U.S. mission. The embassy , widely known as the "den of spies," is now a cultural center.

Participants screamed slogans against the U.S., Israel, and Saudi Arabia.

Rallies replete with "Death to America" chants are staged on the embassy takeover anniversary every year. But U.S.-Iranian rancour is especially strong this time round following Trump's decision in May to withdraw the United States from world powers' 2015 nuclear deal with Iran and reimpose sanctions on Tehran.

The deal brought about the lifting of most international financial and economic sanctions on Iran in return for Tehran curbing its disputed nuclear activity under U.N. surveillance.

On Saturday, Iran's supreme leader said the US decision to reimpose sanctions is another futile attempt to paralyze the Islamic Republic.

"The U.S. has attempted this for 40 years, but in all of these years, Iran was the winner and the U.S. the loser," Ayatollah Ali Khamenei was quoted by the IRNA news agency as saying.

"America has launched an economic and psychological war as a last resort ... But America's plots and its plans for sanctions will be defeated through continued resistance," said Jafari.

Hardline students stormed the embassy on Nov. 4, 1979 soon after the fall of the U.S.-backed Shah Mohammad Reza Pahlavi, and 52 Americans were held hostage there for 444 days. The two countries have been enemies, on opposite sides of Middle East conflict, ever since.

Iranian state media said millions turned out for rallies in most cities and towns around the country, swearing allegiance to the clerical establishment and its hardline top authority Khamenei.

Iran is already in the grip of an economic crisis, and has seen sporadic protests in recent months as Iranian officials have tried to downplay the sanctions and their effects.