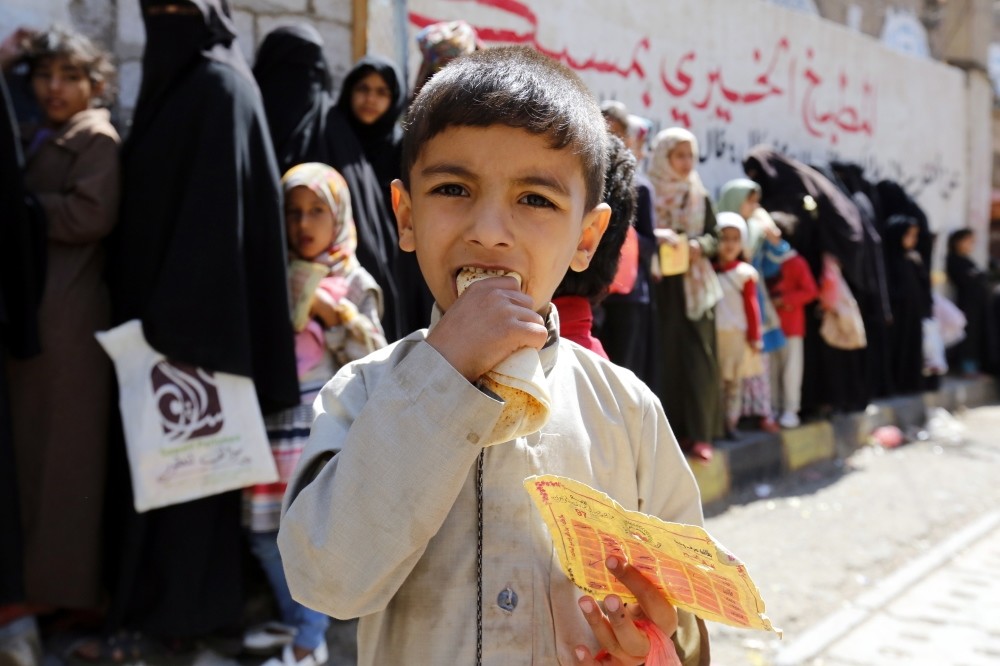 A conflict-affected child eats a loaf of bread after receiving food from a local charity, Sanaa, Nov. 3.
by Compiled from Wire Services Nov 06, 2018 12:00 am

Yemeni children are dying from starvation and disease as trucks with life-saving supplies are blocked in port, leaving medical staff and desperate mothers imploring aid workers to do more, a senior U.N. official said.

Geert Cappelaere, Middle East director for the U.N. Children's Fund (UNICEF), described "heart-breaking" scenes of emaciated children in hospitals in the main port city of Hodeidah and the capital Sanaa, both held by Houthi insurgents. "We have evidence that today in Yemen every 10 minutes a child under the age of 5 is dying from preventable diseases and severe acute malnutrition," he told Reuters from Hodeidah.

The United Nations says about 14 million people, or half Yemen's population, could soon be on the brink of famine in a man-made disaster. Already 1.8 million Yemeni children are malnourished, more than 400,000 of them suffering from severe acute malnutrition, a life-threatening condition that leaves them skeletal with muscle wasting, Cappelaere said. "But there is more. Many children are dying from vaccine-preventable diseases. Today not more than 40 percent of the children throughout Yemen are being vaccinated," he said.

Measles, cholera and diphtheria can be deadly for children, especially those under five, and are exacerbated by malnutrition. "Because of this brutal war, because of obstacles, obstructions being made, it is unfortunately not possible do much more," Cappelaere said. "We may not yet be at the level of a famine but we should not wait until we have declared a famine to step up and to pressure the parties to the conflict to stop this senseless war," he said.

Yemen has been wracked by conflict since 2014, when Shiite Houthi rebels overran much of the country. Saudi Crown Prince Mohammed bin Salman, the former defense minister, and Saudi Arabia's allies launched Operation Decisive Storm in March 2015. Riyadh has accused the Houthi rebel group of serving as a proxy force for Iran, Saudi Arabia's arch foe in the region. Civilians have borne the brunt of the conflict, which has killed over 10,000 people and sparked the world's worst humanitarian crisis. In September, the Saudi-led coalition admitted that mistakes were made in an August airstrike that killed 40 children, an event considered an apparent war crime by the U.N. human rights body. Saudi Arabia's alleged human rights violations are not limited to that country but have expanded beyond its borders, since there is an endless war in Yemen. The U.S. has made a call to end the war, but there was no reference to the future of its arms sales to Saudi Arabia. The U.N. has made no progress in attempts to get the warring sides to negotiate a peaceful resolution to the conflict.