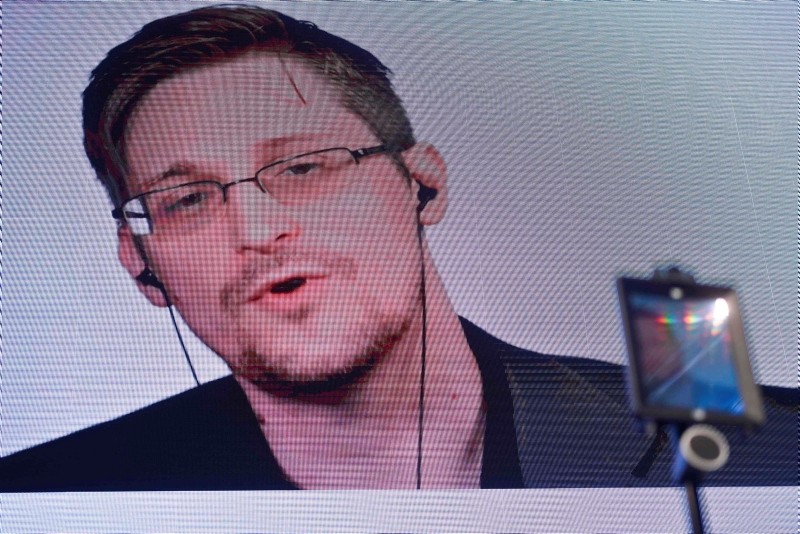 US former CIA employee and whistle-blower Edward Snowden delivers a speech by video conference during the debate at the ,Estoril Conferences - Global Challenges Local Answers, held at Estoril, outskirts of Lisbon, on May 30, 2017. (AFP Photo)
by Anadolu Agency Nov 08, 2018 12:00 am

Addressing a conference in Tel Aviv via a video call from Russia, Edward Snowden said Pegasus spyware sold to governments by NSO Group Technologies was used to track opponents.

"The Saudis, of course, knew that Khashoggi was going to go to the consulate, as he got an appointment. But how did they know his intention and plans?"

Khashoggi, a Saudi national and columnist for The Washington Post, was killed on Oct. 2 after entering the Saudi Consulate in Istanbul.

Once inside, he was immediately strangled and then dismembered, according to the Istanbul Prosecutor's office.

Despite announcing he was killed, Saudi Arabia has yet to reveal the location of Khashoggi's body.

Snowden said the smartphone of one of Khashoggi's friends, who was living in exile in Canada, had been infected with NSO's Pegasus spyware.

He said the software allowed the Saudis to collect information about Khashoggi.

"The truth is that they pursued some of his friends through a program written by the Israeli company."

A report issued by Canadian research institute Citizen Lab said: "We have high confidence that the cellphone of Omar Abdulaziz, a Saudi activist and Canadian permanent resident, was targeted and infected with NSO Group's Pegasus spyware."

The software, which allows almost unlimited surveillance of mobile phones, is seen as the world's most powerful mobile spyware application.

Snowden, who leaked thousands of documents detailing a long-term surveillance program by the U.S. government, was granted asylum by Russia in 2013 after the U.S charged him with espionage.

His residence permit in Russia was extended until 2020.