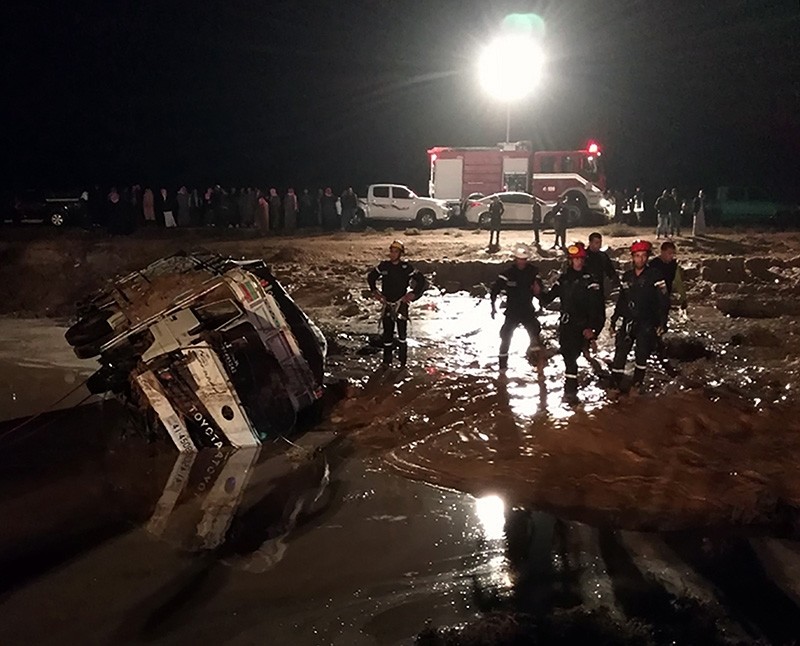 A handout photo made available by the Jordanian News Agency Petra shows members of the Jordanian civil protection services working on a road that was damaged by flash floods, near Madaba, some 30 km south of Amman, Jordan, Nov. 9, 2018. (EPA Photo)
by Associated Press Nov 09, 2018 12:00 am

About two dozen people were hurt and dozens more evacuated from their homes in several locations in the kingdom, as flood waters rose rapidly.

Amateur video posted online showed a powerful torrent rushing through the steep, narrow canyon through which visitors reach the Treasury, the main attraction of Petra, an ancient trading hub carved from rose-colored rock.

The video showed several hundred visitors crowded on a patch of higher ground near the Treasury as local guides helped one woman through surging water toward safety.

"We made it," she shouted as she rejoined her group.

Friday's floods came just two weeks after 21 people, many of them middle school students, were killed in a flash flood near the Jordanian shore of the Dead Sea. The education and tourism ministers resigned after the incident.

The state news agency Petra initially quoted Ghuneimat as saying that four people were killed Friday. Hala Ahbar, a news site linked to Jordan's military, later quoted her as saying the death toll had risen to seven, but did not provide details.

In one incident in a village in the Madaba region, south of the capital of Amman, flooding swept away a vehicle carrying members of one family, Civil Defense officials said. An 11-year-old girl was killed, another girl was seriously injured and divers were searching for three other members of the family.

In the Dabaa area, also south of Amman, two women and a girl were killed in the floods which also forced the closure of a desert highway. A large number of cars were stuck, Ghuneimat said.

The spokeswoman said more than 3,600 tourists visited Petra on Friday, and that efforts were continuing to evacuate them.