Palestinians' right to education in tatters amid Israeli agression 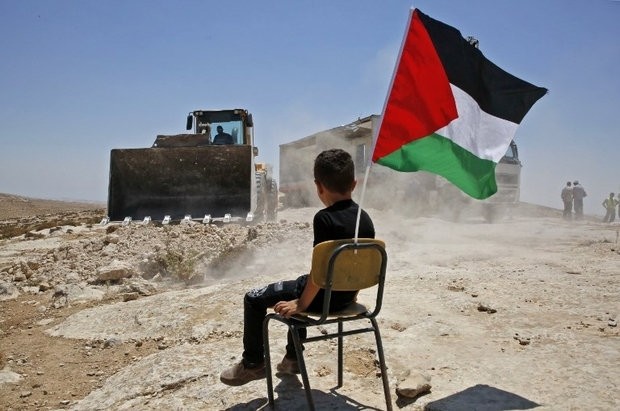 A Palestinian boy sits on a chair with a national flag as Israeli authorities demolish a school site in the village of Yatta, south of the West Bank city of Hebron, July 11.
by Compiled from Wire Services Nov 09, 2018 12:00 am

Facing the challenge of getting an education, Palestinian children living in the occupied territories are subjected to Israeli violence targeted at their schools, which consist mainly of caravans and tents

Destroying the hope and means of education and the future of Palestinian children and youth, Israeli military forces have ramped up demolition of Palestinian schools, tearing down a tent yesterday that was being used as a classroom for Palestinian students in the Jordan Valley region of the Israeli-occupied West Bank, according to a Palestinian official.

"Israeli officials attempted to justify the move by saying the tent was erected without a license," Mutaz Bisharat, a Palestinian Authority (PA) official responsible for tracking Israeli settlement activity in the region, told Anadolu Agency (AA) yesterday. The Israeli army, Bisharat said, had torn down the makeshift classroom and prevented teachers and students from reaching the site.

Last month, Israeli forces, using the same excuse, dismantled a number of makeshift classrooms set up for Palestinian students in the same area. Israeli authorities ordered the closure of the Al-Laban-Al-Zawiya school in the West Bank city of Nablus on the pretext that students had hurled stones at Israeli soldiers and settlers. Despite the order, students and local officials attempted to reopen the school, prompting Israeli forces to use rubber bullets and tear gas canisters to disperse them. The Al-Laban-Al-Sawiya school was attacked by settlers a few months ago and is constantly attacked by the Israeli army, according to Palestinian residents. The Ramallah-based Palestinian government called for urgent international action to stop Israeli behavior that violates Palestinian children's right to an education.

Palestinian schools have long been subjected to Israeli violence. A Palestinian school in the Palestinian village of Khan al-Ahmar has faced demolition, along with the adjacent Bedouin village in the occupied West Bank. In February, the U.N. Office for the Coordination of Humanitarian Affairs (OCHA) said that at least 45 schools in Palestine were facing the threat of destruction by the Israeli authority. In a statement, the OCHA acting coordinator for the occupied Palestinian territories, Roberto Valent, pointed out that a Palestinian school in East Jerusalem was destroyed by Israeli soldiers and added: "The demolition was carried out on the grounds of a lack of Israeli-issued permits, which are nearly impossible to obtain."

Amid deep funding cuts, Palestinian children face the challenge of getting an education in the West Bank. This year, U.N. schools for Palestinians were reopened, though major U.S. cuts have thrown their funding into jeopardy. The U.N. Relief and Works Agency for Palestine refugees (UNRWA) earlier said all 711 schools it runs for 526,000 pupils in Gaza and the West Bank, Jordan, Lebanon and Syria reopened in September despite the $300 million U.S. funding cut.