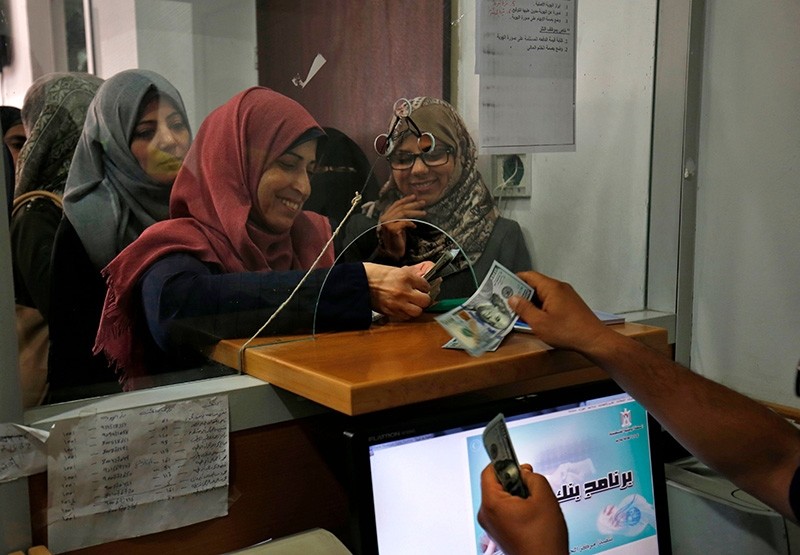 Palestinian civil servants formed long queues in Gaza on Friday to receive Qatari-funded salaries, as part of efforts to ease tensions in and around the impoverished territory.

A total of $90 million is to be distributed in six monthly installments of $15 million, according to authorities, primarily to cover salaries of officials working for Hamas, the Palestinian group that rules the enclave.

Observers for Qatar were present at all 12 post offices across Gaza, a coastal enclave, on Friday to monitor the salary distribution process. Employees had to present a copy of their identity card and be finger-printed.

Some employees showed off hundred-dollar bills before the cameras, after several months of sporadic salary payments in cash-strapped Gaza.

"One day, I have no money to get food or medicine for my children - and now I will buy them food, medicine and clothes," said Wael Abu Assi, a traffic policeman, outside a Gaza City post office where people queued to draw their salaries.

"I am happy and will make my children happy."

Qatar's official news agency said the wealthy Gulf state's donation would benefit 27,000 civil servants. "The salaries for the others will be paid from local revenue," it said.

The cash was driven into the Palestinian enclave through Israel late Thursday by Qatar's envoy to Gaza, Mohammad al-Emadi, according to a government source in Gaza.

Qatar has also said it would hand out $100 to each of 50,000 poor families, as well as larger sums to Palestinians wounded in clashes along Gaza's border with Israel.

The Israeli-authorized money transfer appeared to be part of a deal that would see cash-strapped Hamas end months of often violent protests along the border in exchange for Israel easing its blockade of Gaza.

"This is one of the fruits of the 'March of Return'," Abraham Baker, a police officer who received a full salary, said, using the name of the protests.

Emadi had "smuggled the money" into Gaza in suitcases like a "gangster," the official said.

"The PLO did not agree to the deal facilitating the money to Hamas that way," Majdalani, who is close to Palestinian president Mahmud Abbas, told AFP.

Such a deal harmed Egyptian efforts to reconcile Hamas and the PA and would allow Hamas to consolidate its control over Gaza, Majdalani said.

Hamas has controlled Gaza since ousting forces loyal to the internationally recognized PA in a near civil war in 2007.

"This is capitulation to terrorism, and in effect Israel is buying short-term calm with money, while severely undermining long-term security," he said, quoted in Yediot Aharonot newspaper on Friday.

In another Israeli-approved deal, Qatar has started buying additional fuel for Gaza's sole power station, allowing planned outages to be reduced to their lowest level in recent years.

Egypt and the United Nations have been brokering indirect negotiations for a long-term truce with Israel, with which Hamas has fought three wars since 2008.

Deadly clashes have accompanied the major protests along the Gaza border with Israel that began on March 30, generating at times fears of a new war between Israel and Hamas.

The protest campaign demands the right of return to lands Palestinian families fled or were driven from during fighting around Israel's founding in 1948.

At least 220 Palestinians have been killed by Israeli fire, the majority shot during protests and clashes, while others have died in tank fire or airstrikes. One Israeli soldier was killed by a Palestinian sniper.