Peace tougher as impetus for war stronger in Israel 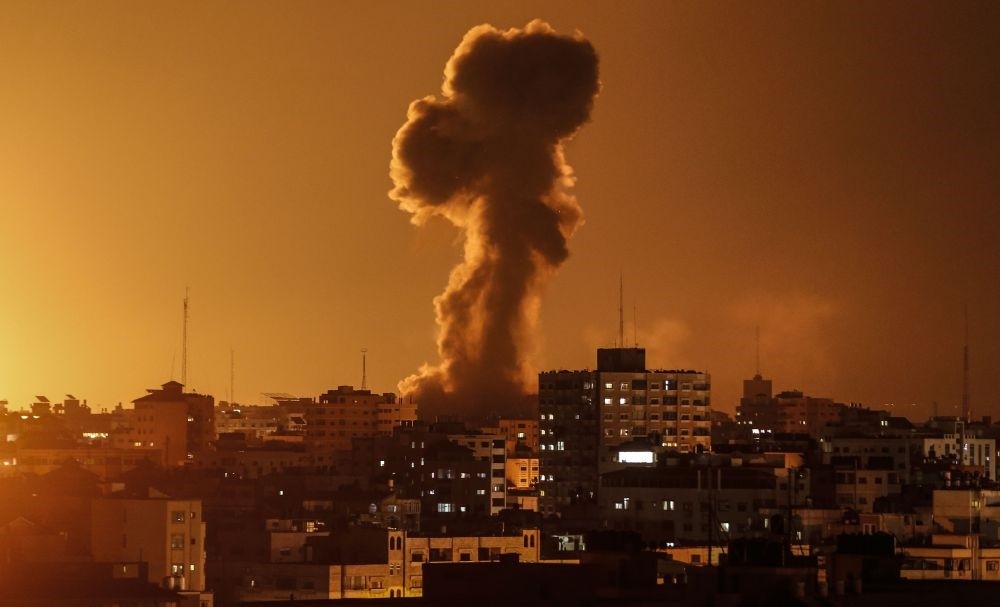 Smoke rises above the building housing the Hamas-run television station al-Aqsa TV in the Gaza Strip during an Israeli air strike, Nov. 12.
by Yusuf Selman İnanç Nov 17, 2018 12:00 am

Recent protests and the resignation of Avigdor Lieberman demonstrate once more that the will for war is strong in Israel, while internal Palestinian disputes serve Israeli interests

It was not so long ago that there were rumors claiming there would be permanent peace between Gaza and Israel. Both the Palestinian and Israeli media were announcing that officials from both sides were meeting under the mediation of third parties. Among the plans were enabling the reconstruction of the Gaza Strip under Qatari sponsorship, a prisoner swap, the reopening of the Gaza border, expanding the currently restrained fishing zone, medical and humanitarian assistance and even the construction of a seaport and airport. However, things have changed very rapidly and war knocks on the door once again. Despite the recent cease-fire, the impetus for war on the Israeli side is stronger.

The recent protests across Israel and the resignation of Defense Minister Avigdor Lieberman once again demonstrate Israel's will to wage another war against Gaza. The fact that peace has faded away is directly related to the upcoming elections in Israel and the dispute between Hamas and Fatah. In the former, Israeli politicians have been considering war with or a tough stance against Palestinians as a political tool. In the latter, the two parties are in a struggle for preserving their positions. Therefore, the peace plans for Gaza have seemingly once more been delayed.

For instance during the campaigns for the Israeli local elections, it was clearly observed that an anti-Palestinian stance was a political tool. One of the most remarkable racist slogans on a street sign was seen in Ramle where right-wing parties generally receive more support. The right-wing Habayit Hayehudi party put up advertisements in Ramle's streets, depicting a veiled woman in front of sacred Jewish signs. The statement under the depiction reads, "There are hundreds of cases of assimilation in Ramle and nobody cares. Tomorrow it could be your daughter." Another statement, which aims to convince residents why they should vote for that party, said, "Only a strong Habayit Hayehudi can preserve Jewish Ramle." In fact, Ramle is mostly populated by Jews but does include Palestinians, and members of both faiths struggle to live together despite Israel's discriminatory policies.

The example is not exceptional and therefore it is not surprising that Lieberman resigned on the ground that he did not favor a cease-fire with Gaza, even a temporary one. When most of the politicians are favoring this stance, average people are no different, as thousands are on the streets demanding war.

On the Palestinian side, the internal dispute between Hamas and Fatah ramped up after the reconciliation process, has largely been halted. According to this internal deal, Hamas was going to hand over Gaza's control, as a result of which Fatah was going to halt the embargoes such as electricity cuts and continue paying officials' salaries. For Israel, the two parties seem to be making similar statements with similar aims but in the end their rivalry feeds Israel's desire for Gaza.

It seems like peace between Hamas and Israel or, to put in a better way, a way for Gaza residents to be free from new conflicts and wars, is not possible at the moment due to Israel's internal politics and the internal disputes on the Palestinian side.