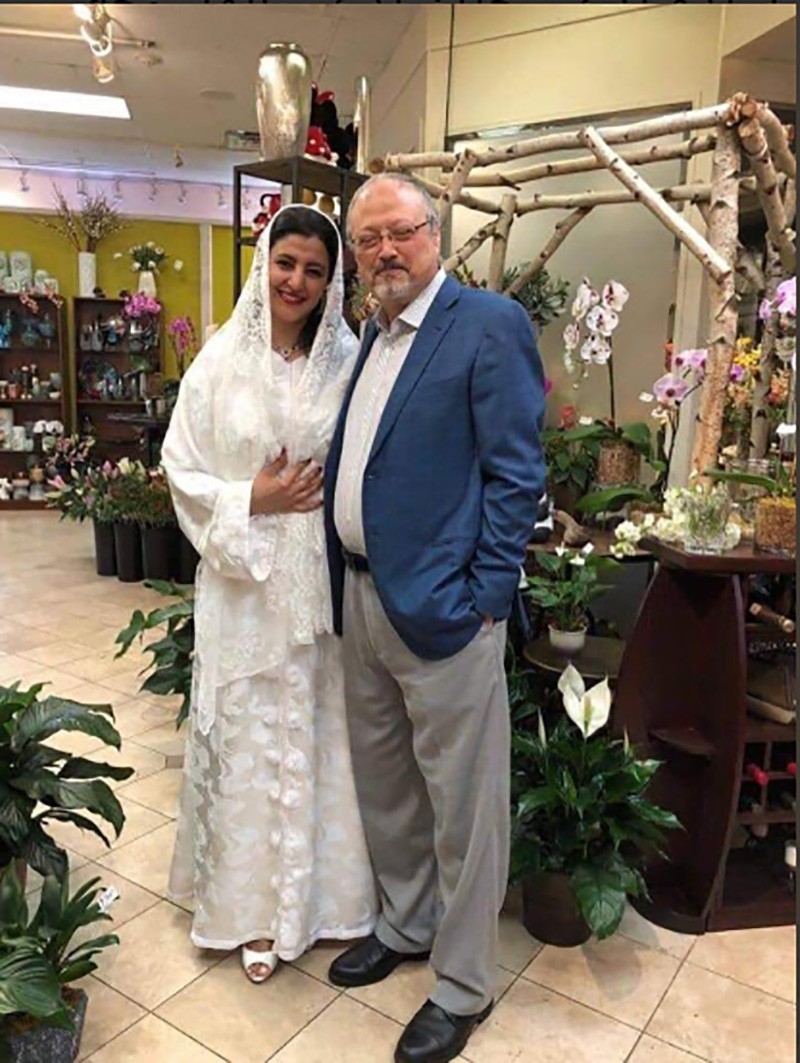 An Egyptian woman is claiming to be the secret wife of the slain Saudi journalist Jamal Khashoggi, presenting pictures of the two together at their wedding in the U.S. in June, according to a report by the Washington Post.

The 50-year-old woman – identifying herself only by the initial of her first name and last name, H. Atr – said she married Khashoggi in a religious ceremony in a suburb of Washington D.C., just a few months before the journalist was killed at the Saudi consulate in embassy while obtaining papers necessary to marry his Turkish fiancee.

"As a Muslim wife, I want my full right and to be recognized," Atr told the Post as her reason for coming forward to reveal their relationship.

One of Khashoggi's longtime associates told the Post he served as a witness at the ceremony, speaking on the condition of anonymity on safety concerns.

Anwar Hajjaj, a professor of Islamic Studies and Education at American Open University in Virginia, is claimed to have presided over the ceremony.

Atr, who claims to reside in the Persian Gulf, said she spent time with Khashoggi when she was on business trips in the U.S. She claims the two met about 10 years ago at a media conference in the Middle East but started a romantic relationship only in the past year.

Atr said she last saw Khashoggi in September. He was concerned about Saudi retaliation for his writing, but didn't believe his life was in danger, she said.

The marriage apparently comes as a surprise to Khashoggi's family members and Turkish fiancee Hatice Cengiz, and adds to the confusion around the dissident journalist's murder by a Saudi hit squad in October.

"Jamal never told me about this woman," Cengiz told the Post in a telephone interview.

"Why is she trying to change the picture people have of Jamal? What does she want?... I suspect that this is an attempt to discredit him and hurt his reputation."

Atr could claim a part of the compensation Khashoggi's family will receive from the Saudi government if she proves the marriage was legitimate. However, she has not presented a marriage license, casting doubt on the legal status of her declared marriage to Khashoggi.

Photos and other evidence that Atr says she provided to Saudi and Turkish officials surfaced on Twitter this week, shared by users supportive of Saudi Crown Prince Mohammed bin Salman.

Khashoggi, a frequent contributor to The Washington Post and critic of the crown prince, was killed Oct. 2 inside the Saudi consulate in Istanbul.

After weeks of denying any involvement in the crime, Saudi Arabia later admitted that Khashoggi had been killed inside the consulate but denied that the royal family and crown prince had any prior knowledge of or responsibility for Khashoggi's killing. The incident was blamed on lower-level officials, including five that are now facing the death penalty over their involvement.

U.S. President Donald Trump has shielded the crown prince from his blame over the incident, including from punishing sanctions imposed this week on 17 Saudi officials.

Earlier reports also claimed Trump-supporting conservatives were heading a whisper smear campaign against Khashoggi to downplay the significance of his murder.

Khashoggi's body has yet to be returned to his family amid reports that it was chemically dissolved.

On Friday, funeral prayers in absentia were held for Khashoggi in Istanbul, Medina, Mecca and other cities across the world.

In Istanbul, mourners raised their hands in prayer outside Fatih Mosque. An imam recited verses from the Quran under a tent set up to protect against the rain, and Khashoggi's friends eulogized him.

Yasin Aktay, adviser to President Erdoğan, called for Prince Mohammed to distance himself from the legal proceedings.

"There is no chance to have a court proceeding that is independent from the crown prince in Saudi Arabia," said Aktay.