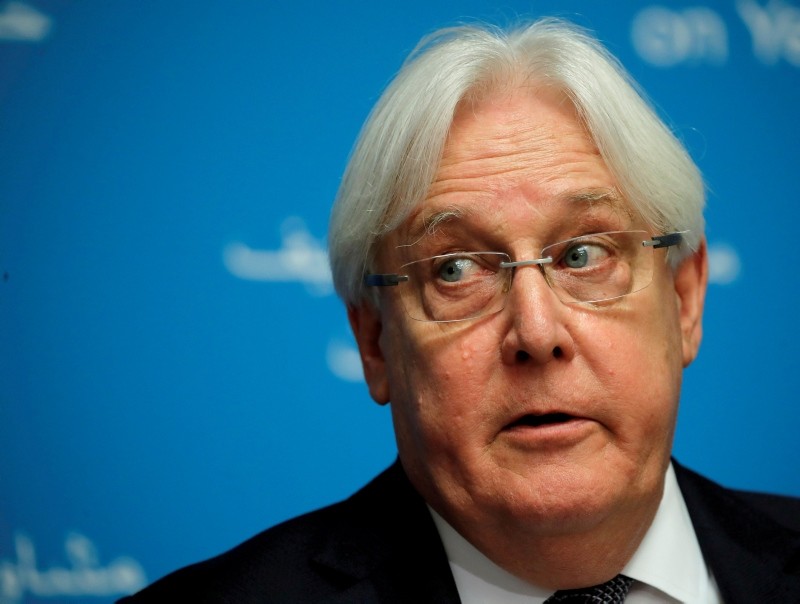 The U.N. envoy to Yemen on Friday urged warring sides to "keep the peace" in Hodeida, saying the rebels agreed to talks on the U.N. taking a leading role in running the lifeline port.

Griffiths, who started a Yemen peace mission in Houthi-held Sanaa on Wednesday, said he has discussed with Houthi rebel officials "how the U.N. could contribute to keeping the peace" in the key port city of Hodeida.

"I am here to tell you today that we have agreed that the U.N. should now pursue actively and urgently detailed negotiations for a leading U.N. role in the port and more broadly," he told reporters during his first visit to Hodeida.

"We believe that such a role will preserve the essential humanitarian pipeline that starts here and serves the people of Yemen."

Griffiths urged Yemen's warring parties to "keep the peace" in the rebel-held Red Sea port city, which serves as the entry point of nearly all imports and humanitarian aid into the impoverished country.

"The attention of the world is on Hodeida. Leaders from every country have called for us all to keep the peace in Hodeida," he said.

Griffiths's visit began as the Houthi-held capital of Sanaa was rocked by a string of intermittent explosions amid fighting between Houthi fighters and forces loyal to the Yemeni government, which is currently headquartered in the southern city of Aden.

Griffiths was in the country ahead of planned peace talks in Sweden in December between the Iran-aligned Houthi rebels and pro-government forces backed by a Saudi-led coalition.

The government claims that the Houthis use Hodeida to import weapons from Iran. The port is also considered the main conduit into the country for humanitarian aid.

The conflict escalated in 2015 when Saudi Arabia and its Arab allies launched a devastating air campaign in Yemen aimed at rolling back Houthi gains.

Tens of thousands of people -- including numerous Yemeni civilians -- are believed to have been killed in the conflict, which has left much of the country's basic infrastructure in ruins.