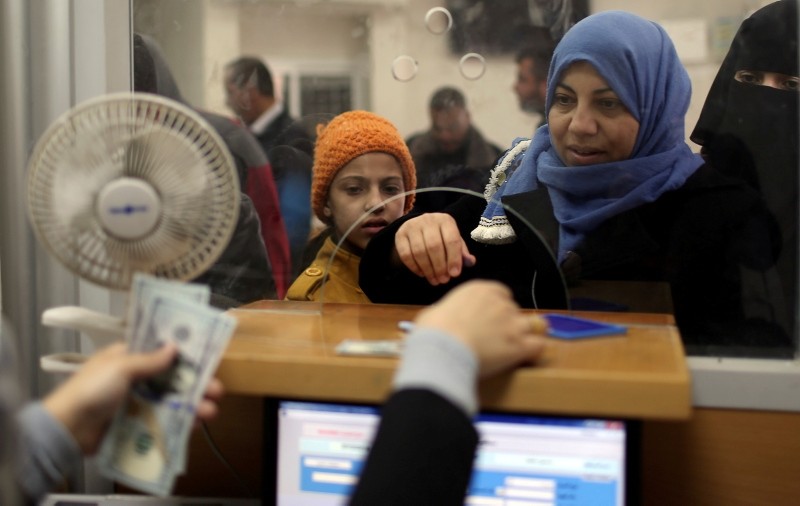 Nearly 30,000 civil servants in the Gaza Strip began collecting their salaries for a second month Friday, after Qatar pumped more money into the Palestinian territory.

The fresh cash infusion from the Gulf emirate comes as tensions along the border between Gaza and Israel have cooled in recent weeks after a controversial truce deal in November halted a major flareup between the Jewish state and the Palestinian resistance movement Hamas.

Twenty Palestinians were wounded by Israeli fire during protests along the frontier Friday, the health ministry in the enclave said, but demonstrations were far smaller than previous months.

The new funds from Qatar arrived despite the ceasefire with Hamas unleashing a political crisis in Israel that saw Avigdor Lieberman resign as defence minister after accusing Prime Minister Benjamin Netanyahu of going soft on Hamas.

Thousands queued in the winter cold to get their cash at post offices — one of which was decorated with a large mural of Qatar's Emir Sheikh Tamim bin Hamad Al Thani and the message "Thanks Qatar."

The enclave's Finance Ministry announced in a statement to local media that the money would be distributed over the next two days, with employees receiving 50 percent of their salaries.

Doaa, a 36-year-old employee at the Women's Ministry in Gaza, said she came early in the morning to receive her salary.

"This payment helps us to live our life and meet the needs of our children, even if only a little."

In Qatar's operation, a total of $90 million is to be distributed in six monthly instalments of $15 million, according to authorities, primarily to cover salaries of officials working for Hamas.

A first tranche of $15 million was distributed in early November, and the second one was brought into Gaza late Thursday by Qatari ambassador Mohammed al-Emadi, Hamas sources said.

The Qatari cash is part of a push for calm between Hamas and Israel, that was supposed to see an end to months of violent protests along the Gaza-Israel border in exchange for an easing of Israel's crippling blockade of the coastal enclave.

But on Nov. 11, Hamas and Israeli undercover troops had a bloody gun battle following a botched Israeli raid in southern Gaza.

In the following days, Hamas fired hundreds of rockets at Israel in response, with the Israeli army striking Hamas targets in Gaza.

A ceasefire two days later ended the violence, but Lieberman, who was opposed the Qatari money transfer, resigned.

Speaking Thursday, Netanyahu defended the Qatari agreement, saying it had achieved "quiet" on the border.

He said energy-rich Qatar, a longtime Hamas ally, had been the only country willing to provide the funds, and that Israel had mechanisms to assess where the funds went.

Qatar "passes on to us finger prints, pictures, signatures, so that the money doesn't just go in to anyone," Netanyahu told foreign diplomats.