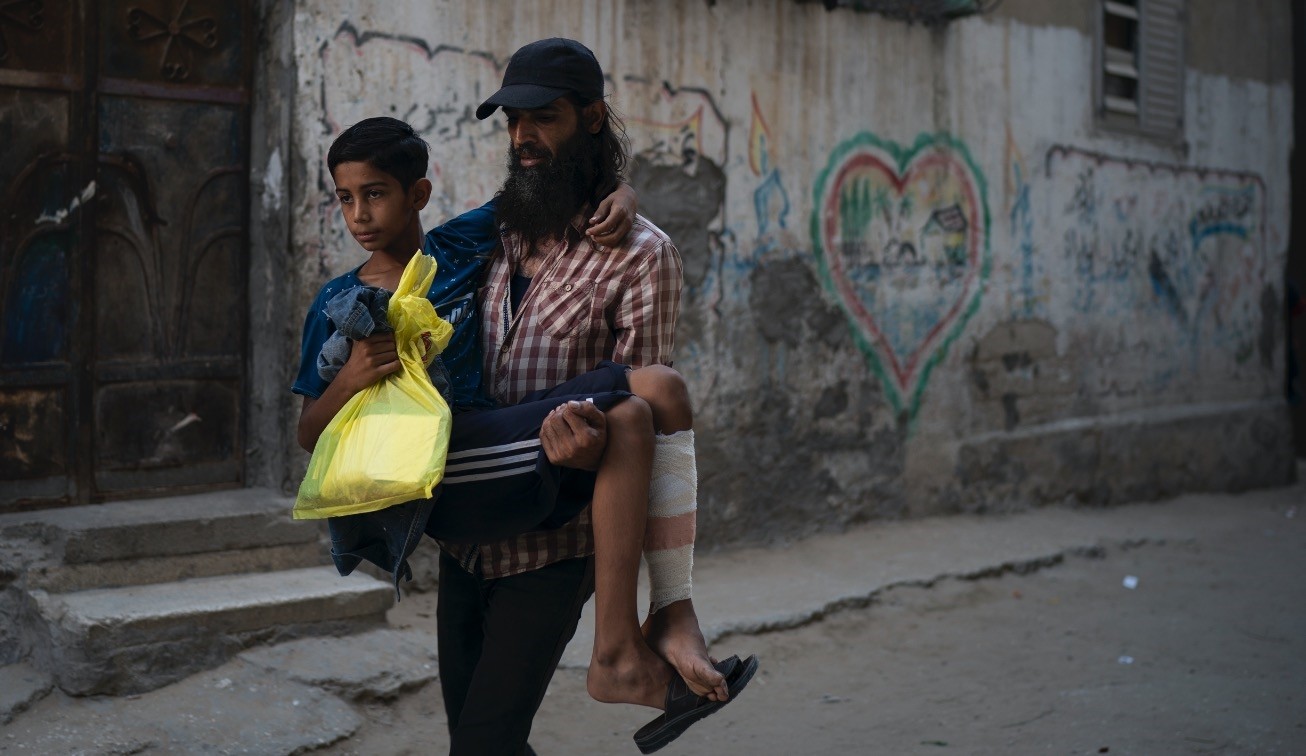 A Palestinian carries his 12-year-old son who was shot in the leg at one of the demonstrations on the Gaza stripu2019s border with Israel, Sept. 16.
by Compiled from Wire Services Dec 10, 2018 12:00 am

Israeli forces deployed along the volatile border with the Gaza Strip have fired live rounds at Palestinian protesters ever since demonstrations against Israel's long-running blockade of Gaza began in March. And for eight months, Israeli snipers have targeted one part of the body more than any other — the legs.

The Israeli military says it opens fire only as a last resort and considers firing at the lower limbs an act of restraint. Israel was criticized by a U.N. human rights body for its killing of protesters in Gaza and treatment of Palestinians, declaring it a "war crime" under the Statute of Rome. Since the rallies began, more than 220 Palestinians have been killed and thousands more were injured by Israeli troops deployed on the other side of the buffer zone.

Of the 10,511 protesters treated at hospitals and field clinics in Gaza so far, at least 6,392, or roughly 60 percent, have been struck in the lower limbs, according to Gaza's Health Ministry. At least 5,884 of those casualties were hit by live ammunition; others were struck by rubber-coated metal bullets and tear gas canisters. International human rights groups have said the military's open-fire rules are unlawful because they allow the use of potentially lethal force in situations where soldiers' lives are not in immediate danger.

The upsurge in violence has left a visible mark on Gaza that will likely remain for decades to come. It is now common to see young men walking through dilapidated streets on crutches. Most have legs bandaged or fitted with a metal frame called a fixator, which uses pins or screws that are inserted into fractured bones to help stabilize them. Doctors Without Borders, known by its French acronym MSF, said most of the 3,000 patients it has treated were shot in the legs, with about a quarter suffering from infections. If left untreated, they can lead to lifelong disabilities or limb amputations. Gaza's Health Ministry says it has carried out 94 amputations since the protests began, 82 of them involving lower limbs.

The aid group earlier said that the huge number of patients was overwhelming Gaza's health care system, which has already been severely weakened by a blockade imposed by Israel and Egypt that has fueled economic stagnation and rampant unemployment and devastated water and electricity supplies.

In addition, struggling to cope with high Palestinian casualties due to the Israeli cycle of violence, hospitals in the blockaded Gaza Strip face severe suffering by medical staff and patients in the face of cutbacks and funding crises, the United Nations warned earlier this month.

Israel controls all access to and from the Gaza Strip apart from the Palestinian enclave's crossing with Egypt. Hamas is in power in the strip and has fought three wars with Israel since 2008. Under an Israeli blockade for more than 10 years, Gaza lacks essential infrastructure and key medical equipment. Many patients seek to travel elsewhere for treatment.