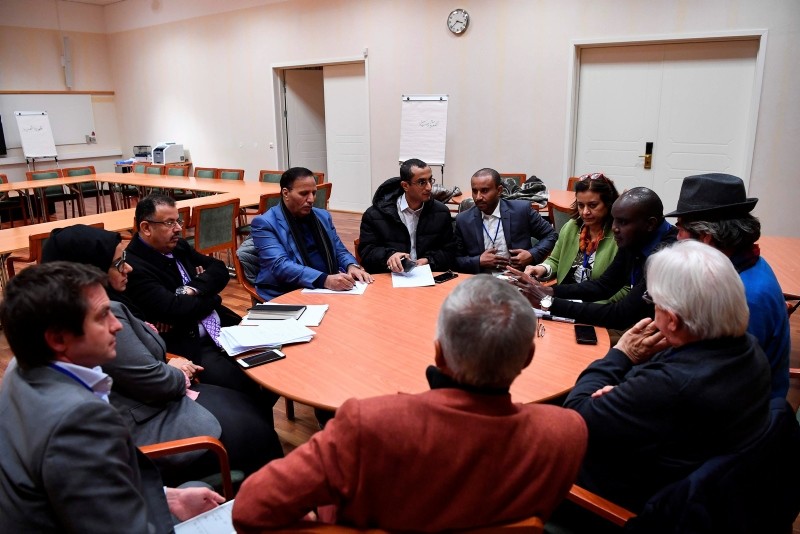 Members of a Yemeni government's delegation take part in a work group with rebel delegation members and U.N. special envoy to Yemen Martin Griffiths as part of peace talks at Johannesberg Castle in Rimbo, Sweden, Dec. 12, 2018.(AFP Photo)
by Compiled from Wire Services Dec 13, 2018 12:00 am

After week-long peace talks in Sweden, Yemen’s warring sides agreed on a Hodeida truce; however its implementation will show how successful the peace talks are in ending the devastating war

The United Nations secretary general Thursday announced that both sides have agreed after week-long peace talks in Sweden to a province-wide cease-fire in Hodeidah and a withdrawal of troops from the contested Red Sea port city. The U.N.-sponsored talks had low expectations for halting the conflict immediately but saw some progress with the agreement of a prisoner swap to include some 15,000 people at the start of the talks last week. Both sides have said they sought to build on the goodwill for future talks, although it was unclear how long the fragile cease-fire would last.

Yemen's foreign minister said yesterday an U.N.-brokered deal on a military withdrawal from Hodeida remains "hypothetical" until rival rebels pull out, in the first reaction to a U.N. breakthrough on the war. An agreement to cease fire and redeploy from the key port city will be "hypothetical" until its implementation, Khaled al-Yamani told reporters, according to Agence France-Presse (AFP). "We are assuming that the other side will withdraw," he said.

The agreement consists of a set of proposals, including one for a political framework for a post-war Yemen, the reopening of the airport in the capital, Sanaa, and a proposal for Hodeidah, a lifeline for millions of Yemenis dependent on international aid.

Shiite Houthi rebels, who are aligned with Iran, have seized several key cities across Yemen, including the previous capital Sanaa with the claim that the internationally recognized government was not functioning and violating their rights. In return, a Saudi-led coalition, consisting of Gulf countries with the exception of Qatar, was launched. With support from the U.S., the U.K. and the European Union, the coalition has pounded Houthi targets, while carrying out ground operations in some areas. The core issues are related to the control of pipelines and the strategic town of Hodeidah.

The Arabian Peninsula country lies beside the southern mouth of the Red Sea, one of the most important trade routes in the world for oil tankers. Yemen has been wracked by conflict since 2014 when Shiite Houthi rebels overran much of the country. Crown Prince Mohammed bin Salman, the former Saudi defense minister, and Saudi Arabia's allies launched Operation Decisive Storm in March 2015. Civilians have borne the brunt of the conflict. The last available U.N. figure for the civilian death toll was in 2016 and stood at more than 10,000. The Armed Conflict Location & Event Data Project, which tracks violence in Yemen, puts it at around 57,000 people. Around 20 million Yemenis are food insecure, U.N. agencies said, adding the conflict ravaging the impoverished country was the key driver behind rising hunger levels.