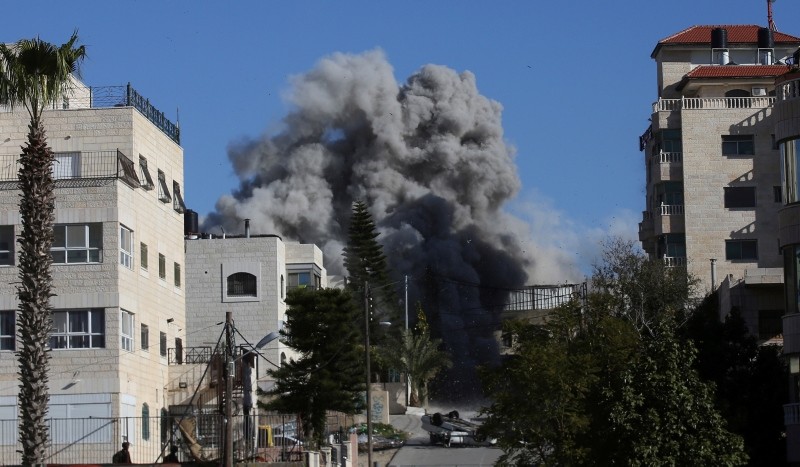 At least 14 Palestinians were injured in clashes with Israeli troops at the Amari refugee camp near the occupied West Bank city of Ramallah, the Palestinian Health Ministry said Saturday.

"Palestinians who suffered the effects of teargas received treatment at the Ramallah Medical Center," the ministry said in a statement.

At dawn Saturday, Israeli forces demolished a four-story residential building owned by a Palestinian woman whose five sons are all serving life sentences in Israel.

Owned by Latifa Abu Hmeid, the ill-fated structure was located in the Amari refugee camp near the occupied West Bank city of Ramallah.

According to an Anadolu Agency reporter based in the area, an Israeli military force raided the camp early Saturday, surrounding the building before bringing it down in a controlled demolition.

Before razing the structure, the army evicted dozens of journalists and solidarity activists who had remained inside the building in a bid to prevent its destruction.

Following the demolition, confrontations broke out between local residents and Israeli troops, with the latter using teargas, rubber bullets and live ammunition to disperse the crowds.

One of them, Islam, was convicted of throwing a rock at a soldier during an Israeli army raid earlier this year in the camp, which allegedly led to the latter's death.

Abu Hmeid also had a sixth son, who was shot dead by Israeli army troops in 1994.

Voicing defiance, Abu Hmeid told Anadolu Agency that the building's destruction "will not break our will".

She also vowed to rebuild the structure "as soon as possible".

"All my sons have been either martyred or incarcerated, and that hasn't broken me," she said, adding: "This is the third time they've destroyed my home."

In recent days, at least five Palestinians have been killed by Israeli forces -- and dozens more injured -- across the occupied West Bank.

On Friday, the Palestinian Prisoners' Association said the Israeli army had detained some 100 Palestinians throughout the West Bank and East Jerusalem since dawn Thursday.