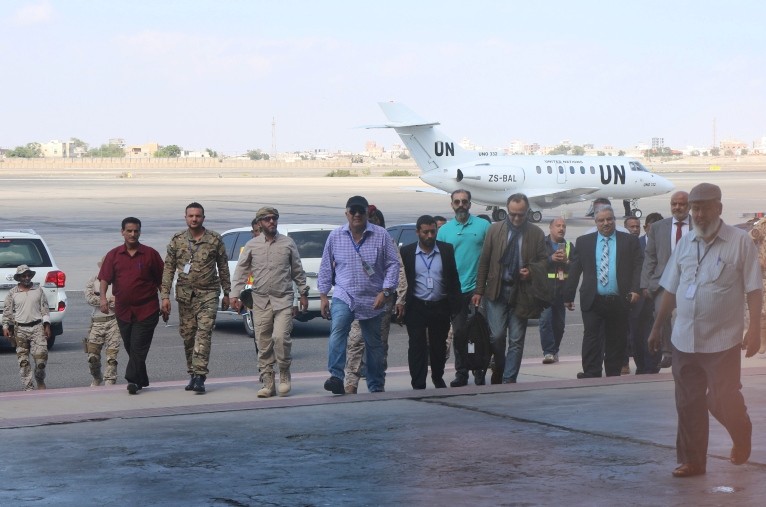 Retired Dutch General Patrick Cammaert, who heads a UN advance team tasked with monitoring a ceasefire between the Houthi group and government forces in Yemen's Hodeidah, walks upon his arrival in Aden, Yemen Dec. 22, 2018. (Reuters Photo)
by Compiled from Wire Services Dec 22, 2018 12:00 am

The head of a United Nations advance team tasked with monitoring a ceasefire between the Iranian-aligned Houthi group and Saudi-backed government forces in Yemen's Hodeida has arrived in the country, U.N. and local officials said on Saturday.

The sides in Yemen's nearly four-year war agreed during U.N.-sponsored peace talks in Sweden earlier this month to stop fighting in Hodeida city and its province and withdraw forces. The truce began on Tuesday but skirmishes continued on the outskirts of the city.

On Friday the U.N. Security Council unanimously approved the deployment - for an initial 30 days - of an advance monitoring team led by retired Dutch General Patrick Cammaert.

The U.N. monitoring team could consist of 30 to 40 people, according to diplomats, and aims to secure the functioning of Hodeida port and supervise the withdrawal of fighters from the city.

The resolution was backed by rebel negotiator Mohammed Abdelsalam, who said late Friday it marked "an important step towards stopping the aggression and lifting the blockade."Quoted by the rebel-run Al-Masirah TV, he criticized, however, the resolution for not condemning the "crimes of the aggressors."

The government of President Abed Rabbo Mansour Hadi reaffirmed its "commitment (to respect) the agreement" reached in Sweden and endorsed by the U.N. resolution.

In a statement also released late Friday, the Yemeni government pledged to work "in a positive spirit" with U.N. envoy Martin Griffiths towards a lasting political agreement to end the war.

Saudi Arabia also welcomed the resolution. Khalid Manzalawi, the kingdom's deputy permanent representative to the U.N., said the resolution means that the Houthis "will lose their margin of maneuver", the official Saudi Press Agency reported.

Upon his arrival in Aden airport, Cammaert was welcomed on arrival by Saghir bin Aziz, a general who heads the government team in a joint committee with Houthi rebels, which is tasked with organizing the withdrawal of troops from Hodeida. He is expected to continue to Sanaa where he will meet Houthi officials.

He will then travel to Hodeida where he will oversee the truce and troop withdrawal from Hodeida city and three ports. Cammaert's team will not be uniformed or armed, the U.N has said, but it will provide support for the management of and inspections at the ports of Hodeida, Salif and Ras Issa; and strengthen the U.N. presence in the war-torn region.

Hodeida, the main port on the Red Sea used to feed Yemen's 30 million people, has been the focus of fighting this year, raising fears abroad that a full-scale assault could cut off supplies to nearly 16 million people suffering from severe hunger.

Sweden's agreement, the first significant breakthrough in peace efforts in five years, is meant to pave the way for a wider ceasefire in the impoverished country and a second round of talks in January on a framework for political negotiations.

A Sunni Muslim Arab alliance led by Saudi Arabia and the United Arab Emirates entered the war in 2015 against the Houthis to restore the internationally recognized government of Hadi, which was ousted from the capital Sanaa.

The Houthis control most urban centers, including Sanaa, while Hadi's government is based in the southern port of Aden.

Around 10,000 people have been killed since the Saudi-led intervention, according to the World Health Organization, although rights groups say the death toll could be five times higher.